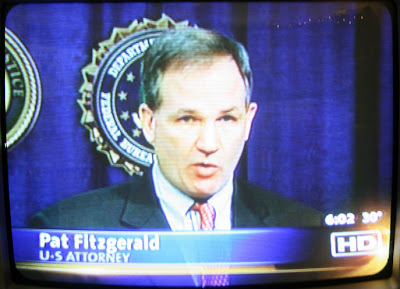 No wonder U.S. Attorney Patrick Fitzgerald, the FBI and other searching out wrong-doing in Illinois don’t have enough staff to clean up Illinois government.

Skim over the details of the health care and Medicare fraud below.

Each of the physicians, who were charged in separate cases, allegedly defrauded either Medicare and/or private health care insurers – in one case for more than $13 million – by either billing for services they never provided or inflating the services they did provide to patients.

In the third case, the operator and manager of two former suburban Chicago durable medical equipment providers allegedly defrauded Medicare and Medicaid by providing power wheelchair or orthotic devices that were not prescribed or medically necessary and the recipients were not qualified to receive.

“Health care fraud remains an important priority of federal law enforcement. We will use all of our resources to ensure that dishonest physicians and other medical providers do not profit from cheating Medicare and private insurers,”

Mr. Fitzgerald announced the cases, all three of which were charged or unsealed this week in U.S. District Court, with

The defendants in all three cases were charged with one or more counts each of health care fraud. If convicted, each count carries a maximum penalty of 10 years in prison and a $250,000 fine. The Court, however, would determine the appropriate sentence to be imposed under the advisory United States Sentencing Guidelines.

In each case, the public is reminded that charges are not evidence of guilt. The defendants are presumed innocent and are entitled to a fair trial at which the government has the burden of proving guilt beyond a reasonable doubt. The details of each case follow:

Between January 2002 and July 2007, he allegedly received approximately $13.4 million – $8.3 million from Medicare and $5.1 million from other health care insurers – in fraudulent reimbursement for the highest level of cardiac care when those services were not performed, and then used the proceeds for his own benefit.

Sheth, 47, of Burr Ridge and whose business office is in Flossmoor, will be arraigned at a later date in U.S. District Court.

According to the charges, Sheth used his hospital privileges to access and obtain information about patients without their knowledge or consent. He then hired individuals to bill Medicare and other insurance providers for medical services that he purportedly rendered to patients whom he knew he never treated.

Typically waiting almost a year after the treatment was purportedly provided, Sheth submitted false claims for reimbursement for providing the highest level of cardiac care – requiring hands-on treatment in an intensive care unit – on multiple days during patients’ hospital stays.

The charges seek forfeiture of approximately $13.4 million and two parcels of real estate in Scottsdale, Ariz. The Government has seized or restrained approximately $11.3 million in various bank and investment accounts held by Sheth and his wife.

The government is being represented by Assistant U.S. Attorney Steven J. Dollear. The case was investigated by the FBI and the Inspector General’s offices of the Department of Health and Human Services and the Labor Department.

Dr. Otto Garcia Montenegro, a general practice physician who owned and operated a private medical clinic, Montenegro Clinic, Inc., in Elmwood Park, where he treated dozens of patients each week, was charged with health care fraud in a criminal information filed yesterday in U.S. District Court.

Between early 2003 and May 2007, he allegedly submitted false health insurance claims totaling approximately $500,000 to Blue Cross Blue Shield of Illinois and other private medical insurance providers. The insurers paid Montenegro approximately $373,000 based on the false claims, the charges allege.

Montenegro, 47, of Elmwood Park, will be arraigned at a later date in U.S. District Court.

According to the charges, Montenegro did not collect deductibles and co-payments from patients and, instead, submitted hundreds of fraudulent insurance claims to insurers for services and treatments that he knew he did not actually provide in order to exhaust patients’ deductibles and co-pays and obtain money for himself. As part of the scheme, he allegedly created hundreds of bogus bills falsely identifying visits and treatments that never occurred.

The case was investigated by the FBI and the Labor Department’s Office of Inspector General.

Stephen Anthony Pam, who controlled and operated two former durable medical equipment companies in suburban Chicago that supplied motorized wheelchairs, scooters, reclining lift chairs and orthotic devices, and Shavon Keyona Williams, who at various times worked as office manager or salesperson for both business, were each indicted on 34 counts of health care fraud for allegedly fraudulently billing millions of dollars to Medicare and Medicaid and other health care benefit programs.

Pam, 47, of Sugarland, Tex., was arrested on January 23 in Houston after returning from a foreign trip. He remains in federal custody while being transferred to Chicago to face prosecution. Williams, 30, of Chicago, will be arraigned at a later date in U.S. District Court. They were indicted by a federal grand jury on December 11 and the indictment was unsealed following Pam’s arrest.

As part of the fraud scheme, Pam and Williams allegedly submitted hundreds of claims for reimbursement to Medicare and Medicaid totaling more than $5 million, falsely stating that Alliance and Medlinc had delivered equipment to beneficiaries when they knew that either no equipment was actually delivered;

In one aspect of the fraud scheme, the indictment alleges that between February 2005 and May 2006, approximately 99 percent of the Alliance claims submitted to Medicare and Medicaid were for power wheelchairs and accessories that were never supplied.

These claims totaled approximately $4.7 million. Pam, through Alliance, allegedly received reimbursements from these claims totaling more than $1.8 million, and the indictment seeks forfeiture of that amount.

The government is being represented by Assistant U.S. Attorneys Felicia Manno Alesia and Ryan Hedges. The case was investigated by the Department of Health and Human Service’s Office of Inspector General and the FBI.