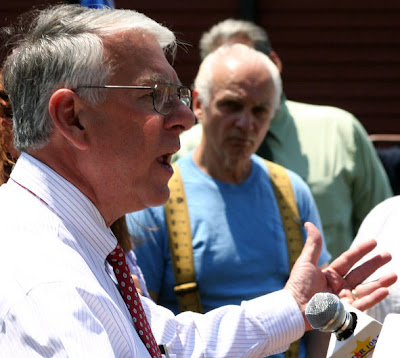 He wants Quinn “to immediately focusing on passing a capital bill that would improve roads and rail throughout the sate and put thousands of Illinois residents to work.”

(ROCKFORD) Congressman Don Manzullo (R-Egan) today sent a letter to Illinois Governor Pat Quinn urging him to immediately focus on passing a capital bill that would improve roads and rail throughout the state and put tens of thousands of Illinois residents to work.

Calling it the “real stimulus plan,” Manzullo said a capital bill would finally spend the $6.2 billion in federal transportation funds – sitting unused in Springfield since 2005 – on road, bridge and rail expansion projects throughout Illinois. The $825 billion stimulus bill the U.S. House passed last week – Manzullo voted against it – would provide $1 billion for road and rail projects in Illinois.

“The $6.2 billion in federal transportation funding we delivered to the state has sat untouched by our state’s leaders the past 4 years. In the meantime, vital road and transit projects in the northern Illinois district I represent have gone unfulfilled as our residents have continued to suffer with unnecessary traffic congestion and hazardous road conditions,” Manzullo said.

“Under your new leadership as Governor, I respectfully request that you reach out to the members of the Illinois General Assembly and make the passage of a capital bill your number one priority in the new legislative session.”

Working with U.S. Senator Dick Durbin and then-Senator Barack Obama, Manzullo secured $51 million in the 2005 surface transportation bill for a host of road and rail projects throughout northern Illinois.

“In addition, the Illinois Congressional Delegation secured a record $6.2 billion, a 33 percent increase over the last transportation bill, for the State of Illinois to use at its discretion. Manzullo and the other Members of Congress are concerned that the state’s failure to spend the money could hurt chances to get more funding for Illinois when the next federal transportation bill comes up for a vote next year.

= = = = =
The photo of Congressman Don Manzullo was taken at a press conference behind the old Algonquin City Hall at the intersection of Routes 62 and 31. The “gridlock” photo was included in a mailing Manzullo made during his fall 2006 campaign.