The pharmacist who broke the Democratic Party dam in the Metro East part of Illinois and rose to be Senate Republican Leader announced his retirement yesterday.

First, Watson was elected to the Illinois House.

Then, he was elected to the State Senate and was replaced with State Rep. Ron Stephens.

The Republican franchise in this St. Louis suburban area is beginning to look and act more and more like the Chicago suburbs in the 1970’s.

Frank Watson was the leading edge.

I remember working with him on State Rep. Penny Pullen’s behalf when she was pushing her public protection AIDS/HIV legislative package. His office was on the first floor of the Capitol then.

Watson was in his prime when he gave an off-the-cuff speech at the Republican State Convention in Decatur in early June. I characterized the talk as a “red meat” talk. 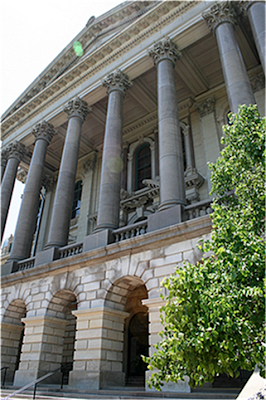 I asked his press secretary if I could have a copy of it. She told me he didn’t prepare a text.

Here is part of that speech:

“We have a U.S. Attorney looming
at the steps of the Capitol!”
and
“It doesn’t have to be that way.