In spite of all the hubbub over the minor league baseball stadium, only three people have filed for McHenry County College Board’s two six-year terms.

One of the challengers, John Darger, was a frequent and vocal opponent to the board majority’s ill-conceived minor league baseball stadium proposal.

Darger participated in MCC board meetings.

Darger participated in Crystal Lake City Planning and Zoning Commission meetings…more than once.

An MCC student at the time, Darger said,

“I don’t see how that will serve the students of McHenry County College.”

This is an active citizen who has probably decided that the majority faction on the McHenry County Board did not represent him.

And decided to do something about it by filing for office.

Darger is last on the ballot and you don’t have to guess if I shall vote for him, even if he is a Democrat.

A second candidate announced the McHenry County Promise at a March 2007 board meeting. 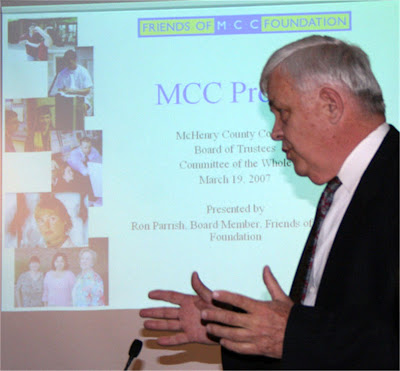 His name is Ron Parrish.

I have no idea whether Parrish supported, opposed or didn’t take a position on the baseball promoters’ attempt to stick McHenry County College taxpayers with paying off the stadium bonds if the baseball team did not succeed.

It is clear that the stadium put quite a crimp in the fund raising. Former board member Irv LeCoque made that clear.

Parish is first on the ballot.

The final candidate is CPA Mary Miller put her Certified Public Accountant reputation on the line by saying about the baseball stadium deal:

And, then she and the board would not release the documents that she verified

“all the figures
were in order.”

Another variation of the long-discredited

Well, the public didn’t trust her and her colleagues.

Just goes to show that having passed the CPA test does not mean one can make good public judgments.

Miller is in the middle of the ballot.

Incumbent Frances Glosson’s term is also expiring this year, but she has decided to retire. She joined incumbents Scott Summers and Donna Kurtz in figuring out the numbers were not all in order.

= = = = =
Ron Parrish is seen next the screen, followed by Mary Miller and Frances Glosson.