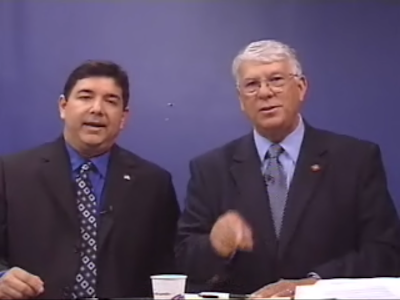 I wrote earlier that national Democrats are running radio ads criticizing him for not voting for the pork-infested stimulus package.

The guts of it was that Manzullo had voted for money to build schools in Iraq, but not in the United States.

Most people won’t figure out that the federal government is not where the money comes from to build schools.

That has been a local responsibility financed in Illinois from property taxes. There has been some state subsidy, starting in this area with Crystal Lake South High School and McHenry West High School in the late 1970’s.

The school bond issues, of course, have to be passed by voter referendum.

It could be argued that turning on the spigot has led to wasteful spending.

Free money usually does that.

= = = = =
Seen on top is Robert Abboud, the Democratic Party challenger to Congressman Don Manzullo, seen on the right. To Abboud’s right, but not in the photo in this Rockford TV debate, was Green Party candidate Scott Summers.