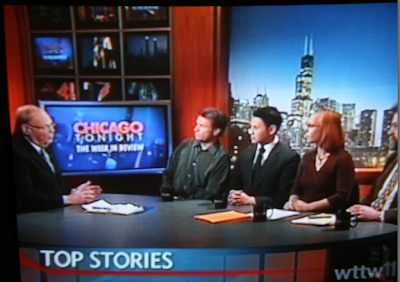 Pretty much nothing in public policy formulation disturbs me more than reporters who do not know anything about percentages.

Maybe I shouldn’t be so critical, but when an opinion leader like WTTW’s “Chicago Week in Review” host Joel Weisman asks four reporters whether they would be willing to pay a one percent income tax increase when he should be asking either

Would you be willing to pay a 33% increase in income taxes?
or

Would you be willing to pay a one percentage point increase in your income tax rate?

I wonder if he deliberately trying to mislead his listeners or just mathematically impaired.

I suspect it is deliberate because of my experience while I was working in the bowels of the Department of Central Management Services.

Driving my little red Honda down Jefferson to work, I was listening to WTAX or WMAY and heard a story about Governor Jim Thompson’s proposing a “1% income tax hike.”

“I’m not going to let them get away with that.”

My little red Honda, by the way, was the only car in the Stratton Building parking lot with a

window sticker on it.

I came back to Bernie’s office for my 15-minute break, picked up the press release and walked it over to the Press Room.

Soon stories started appearing pointing out that the 40% income tax hike being requested by my 1982 running mate, who miraculously changed his mind about the need for an income tax hike just weeks after he was re-elected and I lost my election for State Comptroller to Rolland Burris.

Later the line item paying for my salary disappeared from the budget.

But, back to Weisman and his reporter guests.

All were asked whether they would mind paying a 1% income tax increase.

And, maybe one of them didn’t answer because he was moving to New York, but at least three allowed as how they would be willing to pay one percent more.

That says something of the liberal bias of those on the panel, but it is old news that Weisman can’t manage to find any reporters who are conservative.

Weisman had, of course, pointed out the state was so, so much in debt without pointing out that Governor Rod Blagojevich and his Democratic pals in the General Assembly had increased spending $1 billion a year pretty much every year since his took office.

Unlike former Governor George Ryan, who was trying to tighten the screws on state government after he found out that there expenditures were exceeding tax revenue and caught hell for doing so from Blagojevich during the campaign, the Democrats decided to spend, spend, spend. 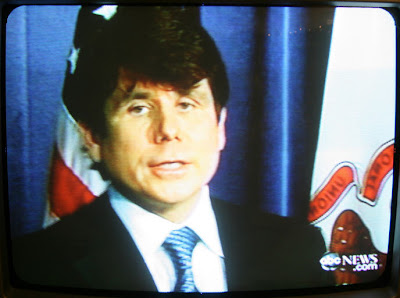 And, don’t forget that Blagojevich contended that the state was “$5 billion” in debt when he took office.

I figured that the state could work its way out of that debt, which I doubted was really $5 billion, in two years, if state government were squeezed and no new programs were started.

However, while mouthing the “$5 billion in debt” mantra, Blagojevich pushed for a $1 billion a year increase in spending.

Never took a course in economics. (Or if either did, it didn’t take.)

And, now, after six years of total Democratic Party control, Illinois is supposed $9 billion in debt.

Great management by the Democrats.

A 33% hike in your state income tax bill
Just in case you need big print.

So, what was Weisman doing?

The same thing Jim Thompson’s press office was doing way back in the early to mid-1980’s.

He was framing the issue in terms favorable to a huge tax increase.

Whether deliberately or not, Weisman’s false description of the size of a one percentage point tax hike will make it easier for the Springfield politicians to enact.