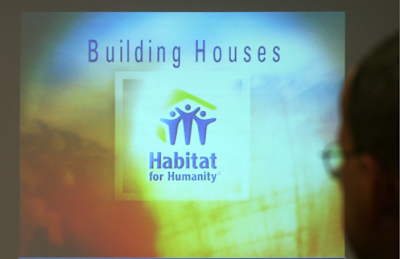 Today seems to be a good day to talk about love.

And love for one’s fellow mankind is what Habitat for Humanity all about.

“The advantage now is that we’re the only one buying land,” the spokesman for Habitat for Humanity of McHenry County told the group.

“They’re anxious to sell land. There’s no buyers for the land except us.”

Lots have been bought in Harvard’s Turtle Crossing.

Woodruff said the next house to be built in Marengo, “if Willow Creek will do the ‘blitz.’” 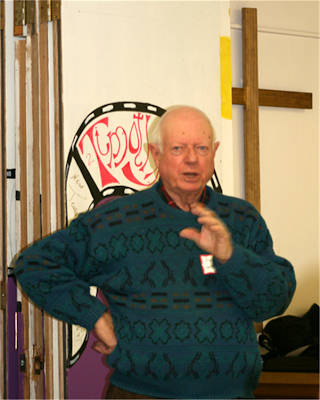 It’s when the Barrington Hills church sends a group who work for a week. Harvard is too far, but Marengo isn’t.

“One of the homes was a women’s blitz.

“Those women were so good that I only had to tell them once,” the carpenter that McHenry Habitat hires observed.

Woodruff explained that Thrivent Financial for Lutherans will pay for the land in Marengo. The insurance company donates all of its profits to mission programs like Habitat for Humanity, he said.

“It’s not a giveaway program,” the retired minister explained. To be eligible, “first of all (a family) has to be (financially) marginal, (not being able to) “qualify for a conventional mortgage.

“But they have to be a sound family.”

One currently on the waiting list is “a young couple with a baby. They’re working, but we believe in them and we’re willing to help them.”

If one has a suggestion for a family who might be eligible, McHenry County’s Habitat for Humanity program has a committee that interviews people and makes recommendation to it board.

And, what happens if a family runs into trouble?

Since the local Habitat group holds the mortgages of the homes it builds until they are paid off, “We’ll evaluate how they can stretch it out. We’ll extend the mortgage time. We have the capacity to do that. We do not want to foreclose on families in trouble. 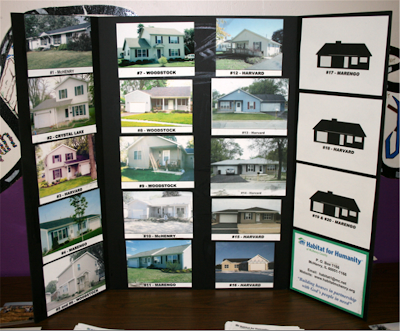 “We have not foreclosed on any families in any of our houses and we don’t intend to.”

Woodruff talked about the sweat equity Habitat families have to invest in their homes.

It’s 200-500. It can be by family, friends, church groups, anyone. But it is a real investment of time that gives the family an ownership stake in the home.

Saturdays seem to be the big work days. Habitat hires a carpenter and “We have a supervisor who is on the scene. I notice from the newsletter that it is Sue Braun.

“What if we don’t know how to do it?” one Methodist man asked.

“We have people on hand to tell you how to do it,” Woodruff replied. “It’s a great way to learn skills.”

And, if you are not the construction type?

“We’re always looking for people to bring lunch for the workers.”