I happened across the following letter to the Crystal Lake Herald that was published February 9, 1977, prior to the Algonquin Township primary election that pitted appointed incumbent Ed Traub against Forrest Hare’s former top assistant Bob Kunz.

You may remember the debacle (Article 1, Article 2) for the local Republican Party when Forrest Hare “lost” the 1973 caucus by four votes and no recount was allowed by the township central committee. Hare ran a write-in campaign and easily beat the establishment candidate.

Below was one of my father’s contributions to Bob Kunz’ campaign. He was running against appointed incumbent Ed Traub, appointed when Forrest Hare resigned to go into private enterprise. 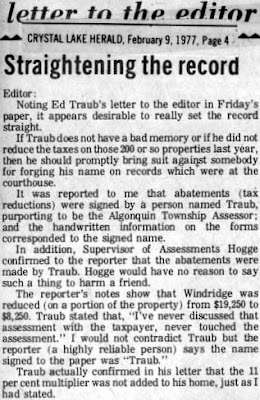 Noting Ed Traub’s letter to the editor in Friday’s paper, it appears desirable to really set the record straight.

If Traub does not have a bad memory or if he did not reduce the taxes on those 200 or so properties last year, then he should promptly bring suit against somebody for forging his name on records which are at the courthouse.

It was reported to me that abatements (tax reductions) were signed by a person named Traub, purporting to be the Algonquin Township Assessor; and the handwritten information on the forms corresponded to the signed name.

In addition Supervisor of Assessment Hogge confirmed to the reporter that the abatements were made by Traub. Hogge would have no reason to such a thing to harm a friend.

Traub actually confirmed in his letter that the 11 per cent multiplier was not added to his home, just as I had stated. 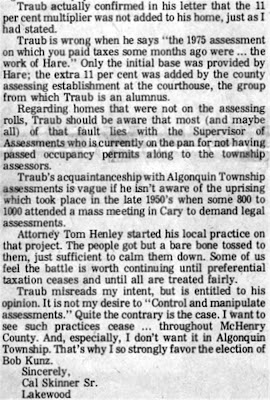 Traub is wrong when he says “the 1975 assessment on which you paid taxes some months ago were…the work of Hare.” Only the initial base was provided by Hare; the extra 11 per cent was added by the courthouse, the group from which Traub is an alumnus.

Regarding homes that were not on the assessing rolls, Traub should be aware that most (and maybe all) of that fault lies with the Supervisor of Assessments who is currently on the pan for not having passed occupancy permits along to the township assessors.

Traub’s acquaintanceship with Algonquin Township assessments if he isn’t aware of the uprising in the late 1950’s when some 800 to 1000 attended a mass meeting in Cary to demand legal assessments.

Attorney Tom Henley started his local practice on that project. The people got but a bare bone tossed to them, just sufficient to calm them down. Some of us think the battle is worth continuing until preferential taxation ceases and we are all treated fairly.

Traub misreads my intent, but is entitled to his opinion. It is not my desire to “Control and manipulate assessments.” Quite the contrary is the case. I want to see such practice cease…throughout McHenry County. And, especially, I don’t want it Algonquin Township. That’s why I so strongly favor the election of Bob Kunz.

Kunz won that primary election and is running unopposed for re-election as Algonquin Township on February 24th.