It struck me as highly unusual the survey proposed to send residents of Huntley District 158 had four options and all of them involved spending millions of dollars. 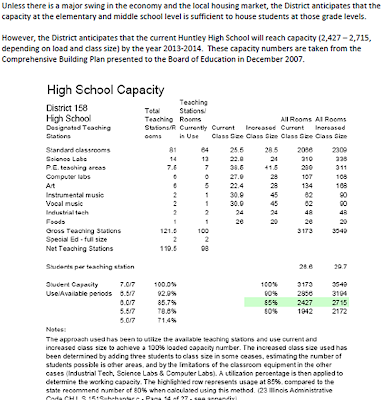 The premise of the whole questionnaire was that classrooms could not be scheduled to be just 10% empty at Huntley High. (Click to enlarge the memo.)

If only 10% of the classrooms were empty, there would be more than enough capacity for the next decade.

You might think the administrators in District 158 would have to first prove they must have 15% of the classrooms empty during the day before a majority of the board would agree that any additional capacity is needed.

Not so in Huntley’s school district where the board majority, led by Mike Skala and Kim Skaja, pushed for an expensive survey before the facts became clear.

How common is it to do an expensive survey of all residents before there is a proven need for more high school capacity in the years ahead?

That’s probably why “None of the Above” is currently not an option on the survey.

Residents also don’t get to choose “Schedule 10% of the High School Classrooms Empty and Build Nothing.”

It is interesting how seldom “good managers of the taxpayers’ money” is one of the descriptors used in education circles. 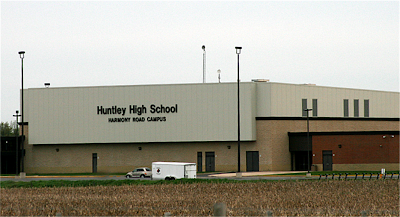 For some unknown reason, behind the scenes, the option of expanding the high school became “Expand by 500” rather than the original “Expand by 300” recommendation.

So, it make the “build a new high school” look more reasonable.

Yet for 300 more students no expansion is needed for:

The figures could only be jacked up to the $14,850,000 on the “addition” part of the questionnaire by assuming they were needed.

By making the cost of expansion look expensive much more expensive than it needs to be, this makes the “Build a New High School” path that Skala and Skaja want look more favorable.

Here’s betting that at the next Board meeting the vote will be to do the survey after the school board Election on April 7th, hoping Larry Snow will not be re-elected on the Board.