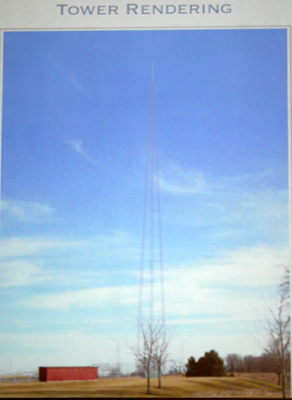 BMB proposes to pay the college a definite $5 million and maybe as much as $6 million.

People from virtually every place in McHenry County into surrounding counties and Wisconsin will be able to see it.

The lights will radiate 30 miles at night, “if you’re looking for it,” as Maguire put it.

Maguire is a good salesman. He disarms potential opponents by agreeing that if he were in their place he would be concerned.

Bob McCormick, a pilot and structural steel worker in college, pointed out the Eiffel Tower is two-thirds the size of the proposed tower. 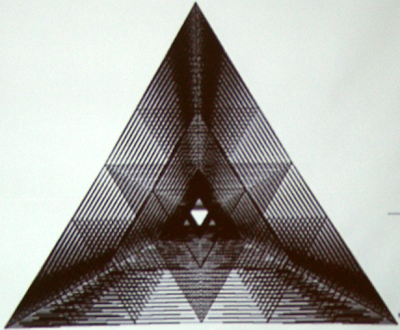 “If the business plan fails, it’ll be pug ugly,” he said after pointing out that the World Trade Center had been “taken down by two airplanes.”

“It’ll be like the Motorola plant in Harvard, the empty stores in Crystal Lake.”

He revealed that most pilots fly 600 and 800 feet above the surface. Because of O’Hare, other traffic has to go at low levels to avoid commercial planes.

“The problem with the tower lighting, those lights appear in a field of lights, he explained later.”

Other extremely high towers are in the middle of nowhere where they are easy to see, he said.

“You’re going to get a whole lot of bites at this apple.” 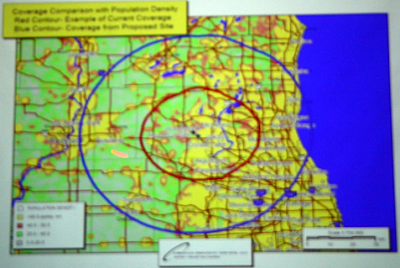 Both seemed competent, having worked on some of the biggest tower projects in the country.

Kirschner displayed this slide, which seems a bit out of focus, but makes the point about the value of the MCC site.

FM stations or potential stations that now reach 200,000 or so listeners would be able to reach about 3 million people within the blue circled area.

And radio is all Maguire talked about tonight until after I told him that people without cable television were thinking they might get better over the air reception, if his tower were constructed.

Would television stations be able to send a signal from his tower?

“Not unless they (the TV stations) pay,” the entrepreneur told me.

But he said that having learned that Rockford’s and Chicago’s TV signals faded out in McHenry County, “I’ll go call those TV stations now that I know.”

And there will be “no limitation on the number of stations, except structural capacity,” which I think he said was 11.

I also asked Maguire if cell phone companies could locate their equipment on his tower.

The answer was “Yes,” which just might explain why T-Mobile dropped its request for a cellular tower in Crystal Lake’s Ken Bird Park.

Trustee Scott Summers asked if there were any other uses, suggesting Defense, Homeland Security and several others.

“Any use imaginable,” Maguire replied.

“Would it be possible for the college to share in those revenue streams?”

Summers also said he felt “strongly about the money com(ing) to the college,” rather than the college’s foundation.

After I made the same point in the 3 minute public comment I was allowed after all the questions by board members (who have been talking about the matter since February 28th of last year), Board President George Lowe said,

“I think the board agrees.”

I also suggested that the board should not make a final decision the Thursday after next at its regular board meeting.

I feel strongly that a deal of this magnitude needs time to percolate among the citizenry.

Should the sixth million go by the wayside, if BMB doesn’t find a fifth broadcaster within five years, for instance?

Who knows how long this economic slump is going to continue.

Two citizens were forthright in their support. One was Jim Bishop, who handled legal work for the zoning for the other towers next to McHenry County College and engineer Loren Burkett.

The last question was probably the most incendiary.

The closest resident to the tower speaking, Jerry Welsh, said,

“This is going to be a beautiful terrorist target. How are you going to protect it?”

Macguire seems resigned to the possibility.

“If someone wants to (blow out one of the three support legs), there’s no way we can stop it.

“How can we protect anything?” he continued philosophically.

“We can put cameras on it, but we’ll just get to see him blowing it up.” 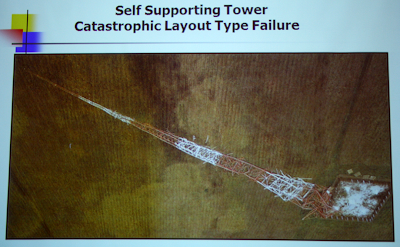 P.E. Jones stressed that the tower was being designed to prevent a catastrophic layout collapse, seen above.

Of the three candidates on the ballot for the April 7th MCC board election, only one attended the meeting. Mary Miller, a trustee up for re-election was one absent.

Only challenger John Darger was there.

He pointed out that local residents could have a win-win outcome or a lose-lose outcome. In the lose-lose scenario, the college would have sold off land that it needed and the FM radio stations would be blasting “slock across our landscape.”

“I’m not hostile to the idea,” he said, noting he was just trying to show both sides.

Darger had more than three minutes to contribute, but was cut off by Board President George Lowe, as he was saying that he would like to see the college have a radio station of its own.

Safety concerns were raised, most prominently by Board member Summers.

A former Armed Forces radioman Mike Toyler commented, “This amount of power is nothing. This will not impact life safety or (cause) biological concerns.”

= = = = =
The images are referenced in the text of the article except for the two schematic drawings of the tower. The one on the left shows how it will sway in the wind. The triangle is a view from either above or below. In any even the tower will have three legs.