U.S. Attorney Patrick Fitzgerald issued a press release today implicating two Round Lake Beach Residents. This continues the Chicago-area effort to attack the supply side of the mortgage fraud scandal. The details follow: 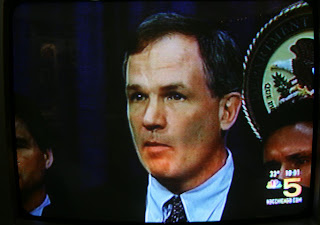 The defendants, who include

were each charged with one or more counts of mail, wire or bank fraud in an eight-count indictment that was returned by a federal grand jury yesterday.

As part of the alleged scheme, the indictment specifies eight residential properties – seven of them on the south side of Chicago – upon which mortgage loans were fraudulently obtained between 2002 and 2007.

Two of the defendants, Deangelo McMahan, 36, of Hazel Crest, and Fred Haywood, 37, of Chicago, both of whom were loan officers for various mortgage lenders, were initially indicted in December. Four new defendants are

Arrest warrants have been issued for McKenzie and Carl McMahan, while the others will be ordered to appear for arraignment at a later date in U.S. District Court, including Deangelo McMahan and Haywood, who were previously released on bond.

According to the indictment, the defendants schemed to arrange for buyers with good credit, but insufficient income, to purchase homes by promising them money for acting as nominees, knowing that in most cases the buyers did not intend to occupy the homes as their primary residences or fulfill any long term payment obligations.

The defendants and others caused false information to be included in mortgage loan applications regarding the applicant’s income, assets, employment, intention to occupy the home and the source of the down payment so the applicant would falsely appear to qualify for a loan.

They also allegedly schemed to create false appraisals that did not reflect the fair market value of the properties and were designed to create excess value.

In some instances the defendants funneled excess cash they generated from inflated appraisals on the properties to sham businesses they had created, while other times they flipped the properties from one sale to another to make a profit, the charges allege.

The indictment also seeks forfeiture of $2,383,020, which reflects the loss suffered by various mortgage companies that were victims of the alleged fraud scheme.

The charges were announced by Patrick J. Fitzgerald, United States Attorney for the Northern District of Illinois; Robert D. Grant, Special Agent-in-Charge of the Chicago Field Office of the Federal Bureau of Investigation; and Thomas P. Brady, Inspector-in-Charge of the U.S. Postal Inspection Service in Chicago.

The government is being represented by Assistant U.S. Attorney Jason Yonan.

The public is reminded that an indictment contains only charges and is not evidence of guilt. The defendants are presumed innocent and is entitled to a fair trial at which the government has the burden of proving guilt beyond a reasonable doubt.