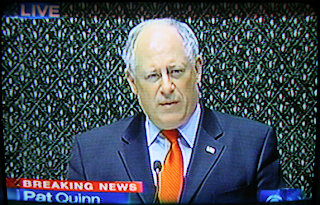 In a heartbeat is my belief.

And how would he get to the United States Senate?

If Roland Burris resigns, he could appoint himself.

I would argue that his political style, based on advocacy of causes (relevant or not), is much better suited to a U.S. Senator than a governor.

And who would succeed Quinn as Illinois governor?

That’s what her Dad wants, right?