A press release has been received from 16th District Congressman Don Manzullo announcing an addition half million to improve Randall Road.

Patrick Engineering men were out surveying it today, probably just a coincidence. 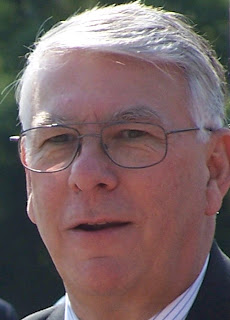 The funding is included in the transportation appropriations bill, which Congress is scheduled to consider later this week. In 2005, Manzullo secured $5.72 million in the long-range federal transportation bill for the Rakow Road widening project.

“Rakow Road is a significant regional arterial road that carries tens of thousands of McHenry County residents to work and school each day,” Manzullo said.

“The widening project will double capacity on Rakow Road and reduce the significant congestion motorists experience each day.

“Reducing traffic congestion continues to be my number one priority for the people of McHenry County.”

McHenry County transportation officials are proceeding with Phase II engineering, which involves acquiring needed land and drawing contract plans for the project. Construction could begin in 2010.

In addition to Rakow Road, Manzullo has secured significant federal funding for the Western Bypass of Algonquin ($19 million) and the Route 47 widening project through Huntley ($6.7 million).

In addition, he worked with U.S. Senators Dick Durbin (D-IL), Barack Obama (D-IL), and the entire Illinois Congressional Delegation to secure an additional $6.2 billion in federal road funds in 2005 for the State of Illinois. Those federal funds have sat unused as the Governor and state legislative leaders have failed to agree on a capital plan.

= = = = =
Rakow Road will be widened to six lanes where the “S” curve now goes from four to two lanes. Beyond Pyott Road, the first light after the “S” curve–between the gravel pit lakes–will become four lanes. The bottom picture shows this road near Pingree Road. The head shot is of Congressman Don Manzullo.