The Chicago Tribune has finally noticed the impact of last year’s minuscule CPI increase on schools. 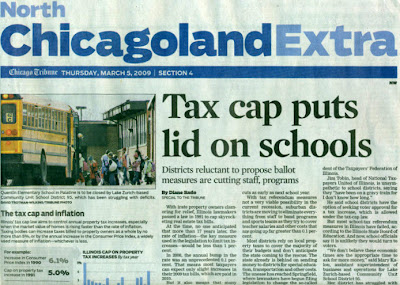 Readers of McHenry County Blog could have figured out the angst school and other tax district officials are feeling well before the Thursday Tribune article.

Diana Rado, who used to be the Tribune’s best education writer until she met one of those downsizing problems, writes as a free lancer that 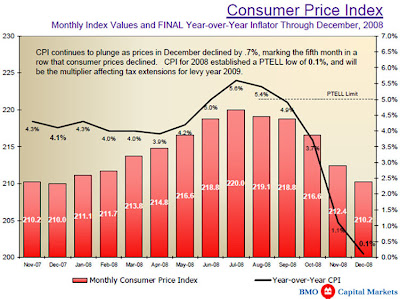 the one-tenth of one percent increase in the Consumer Price Index “means most taxpayers can expect only slight increases in their 2009 tax bills, which are paid in 2010.“

She points out that tax referendums “not a very viable possibility in the current recession.”

I Cary Grade School District 26 board didn’t get the memo.

“One bill filed in the General Assembly in February would prevent the cap from falling below 2 percent. Another bill would allow the use of a different inflation measure in the formula—an employment cost index that tracks changes in labor costs—which could benefit school districts.”

I find 110 bills designed to gut the tax cap.

Two concerning allowing a minimum of a two percent increase in what schools can get each year, even if the CPI is less, are

Viverito has no co-sponsors, but he is Chairman of the Senate Revenue Committee.

Both bills are posted for hearing next week. The House hearing is Nest Thursday at 9 AM. The Senate hearing is at 2 on Wednesday.

By clicking on their names, you can find their phone numbers, if you wish to call them.

Other bills to worry about are