So, how diverse is federal representation of McHenry County?

Here are two replies to a constitution comment in opposition to the Democrats’ Federal Bailout bill:

Thank you for contacting me in opposition to the American Recovery and Reinvestment Act of 2009 (H.R. 1). It is good to hear from you.

I agree with you 100 percent. I am deeply disturbed that this so-called “stimulus” bill focuses more on spending taxpayer dollars than on returning Americans to work.

According to the non-partisan Congressional Budget Office, H.R. 1 will spend $1.1 trillion of taxpayer dollars and does little to stabilize our economy, spur significant job creation, or provide taxpayers an economic result that is worthy of their investment. 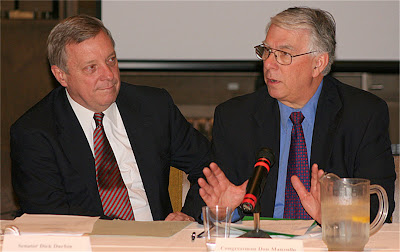 H.R. 1 is simply chocked full of hundreds of billions of dollars for programs that generally receive funding through the regular annual budget process (where programs are evaluated with regard to the money that is budgeted), and should not have been incorporated into an emergency stimulus bill, whose costs go directly to the deficit.

Instead, I voted for a pro-growth economic alternative package authored by Representatives David Camp and Eric Cantor that would provide relief to those who need it most: middle-class families, job seekers, small businesses owners, the self-employed, and homebuyers.

At a fraction of the cost, this alternative would create 6.2 million new jobs by the end of 2010, which is twice the goal sought by President Obama. Unfortunately, the Camp/Cantor substitute amendment to H.R. 1 failed by a vote of 170 to 266.

Thank you again for contacting me about this issue. Your input is important to my work here in Washington.

Now, compare that with the response from Illinois’ leading Democrat in Congress, U.S. Senator Dick Durbin:

Thank you for writing to me about the Congressional response to the crisis in our nation’s financial markets. I understand your concerns and appreciate hearing from you. 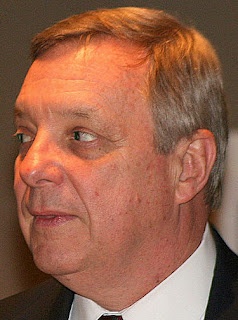 The seeds of the financial crisis were sown when the mortgage industry began offering large numbers of subprime mortgages that were very profitable in the short run but unsustainable in the long run. The failure of the Bush Administration to properly regulate the mortgage markets allowed these subprime mortgages to flourish. When the house of cards began to fall, the devastation was swift and far-reaching and it has extended far beyond the subprime market.

As major financial firms began to totter, the head of the Federal Reserve and the then-Secretary of the Treasury told the leadership of the House and Senate that if we did not act quickly, the American economy could melt down and the global economy as well. It was sobering news.

Congress has made substantial changes to President Bush’s initial proposal to increase accountability and the transparency with which the funds are used.

I supported the stabilization package because the alternative – doing nothing – would have been an abdication of responsibility in the face of our nation’s worst economic crisis since the Great Depression. Without action, the credit markets would tighten further, devastating many families and businesses. The problem is not just the declining value of people’s retirement savings, although that genuine concern is already affecting people’s retirement decisions. The deeper problem is that without adequate access to credit, small businesses are unable to make payroll and must begin laying off workers; students cannot obtain needed student loans; auto loans and mortgages dry up; and businesses begin to fail because they can no longer finance day-to-day operations.

Congress has held hearings to investigate the practices that led to the demise of companies such as AIG, Fannie Mae, and Freddie Mac, and to identify further reforms to restore the integrity of our financial markets. Our financial system requires a fundamental overhaul, so that the needs of American families stand above the interests of Wall Street. We must do more to address the needs of the homeowners who were caught up in the tricks and traps of the subprime mortgages Wall Street companies peddled so profitably. I continue to work for further reforms to reduce the foreclosure rate.

I plan to reintroduce legislation this year that would create a Consumer Credit Safety Commission, a single government agency charged with ensuring that the offering of financial credit to consumers is responsible, accountable, and transparent. This new agency would look out for consumers first, acting quickly to protect consumers from predatory practices and holding companies accountable when they abuse, deceive, or take advantage of the consumers they claim to be helping.

I will keep your views in mind as Congress considers legislation to make our financial system more transparent, safe, and accountable.

= = = = =
Please click on the link about the seeds of the mortgage crisis above.