Below is a statement issued by Carpentersville School District 300’s School Board President Joe Stevens and Superintendent Ken Arndt (additional paragraphs have been added in order to make it easier to read on a computer screen):

It is the responsibility of the District 300 Board of Education to provide a quality education for all children at a cost the community can afford. D300 leaders are committed to working within our means, to ensure we maintain this balance. 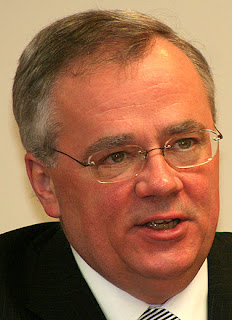 Despite the District’s good fiscal management and planning over the past several years, D300, like many school districts across Illinois and the nation, is entering a potentially difficult economic period in 2009-2010.

As you likely read in the February 2009 D300 newsletter, this is mainly due to two reasons, neither of which is in the District’s control: (

1) the economic recession’s impact on the December 2008 consumer price index (CPI), which will severely restrict the revenue that D300 can collect this school year under the tax cap law, and

(2) the potential for insufficient education funding from the state in the 2009-2010 school year due to the massive deficit now faced by Illinois state government.

Because the largest portion of any school district’s budget is personnel, this is always an area of focus when working to maintain a balanced budget.

Sometimes this forces a school board to make difficult decisions.

This evening (Monday, March 9), the D300 Board of Education voted in an open meeting to release 46 non-tenured (less experienced) teachers as of July 1, 2009, for either performance issues or budgetary reasons.

Fourteen of them were released due to performance problems and will not be rehired.

However, the remaining 32 teachers were released strictly for budgetary reasons.

This aspect of the vote was one of the most difficult and painful decisions that this School Board has ever faced.

But the D300 Board is not alone in the challenge of balancing a quality education with conservative fiscal planning during this economic recession. School districts near and far are releasing staff due to the precariousness of the state budget.

These 32 staff members constitute all of the first-year, general education (not bilingual or special education) elementary school teachers in D300.

They did not have performance issues, and they will be provided letters of recommendation.

The Board is releasing them now to meet the state statute on proper notification, allowing them time for their employment transition.

There are no current plans to release any other staff members due to budgetary reasons for the 2009-2010 school year.

Whether or not some return to D300 will depend on subject-area needs, funding, and student enrollment figures (enrollment growth in the upper grades but a drop or stagnation in lower grades, for example).

Regardless, we expect a district-wide net loss of at least 15 teaching positions this fall.

In the months leading up to D300’s March 2006 referendum, virtually no one could have anticipated the dire economic situation now faced at local, state, and national levels.

These 32 releases are specifically intended to help keep the budget balanced so that D300 does not have to return to voters for years to come.

D300 expects for the most part to still be able to maintain the average elementary class size that was promised in the referendum, partly due to falling elementary enrollment and the steep drop in housing sales.

The D300 Board has chosen to be especially cautious now to protect local taxpayers over the long term.

= = = = =
Dist 300 School District Superintendent Ken Arndt can be seen in the top photo, Board President Joe Stevens below. Both photos were taken at last winter’s Legislative Breakfast.