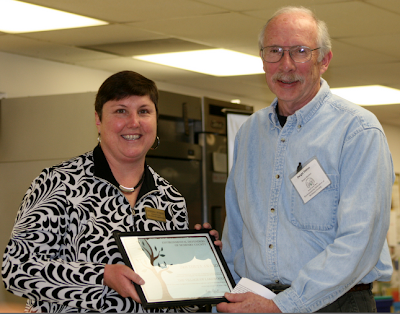 “It’s a terrific effort that we hopes rubs off on Crystal Lake and Lake in the Hills,” award presenter Dwight Dalton said.

“This ordinance is simply Lakewood’s attempt to be the most environmentally sensitive community in McHenry County and, maybe, in Northern Illinois” Peterson said. 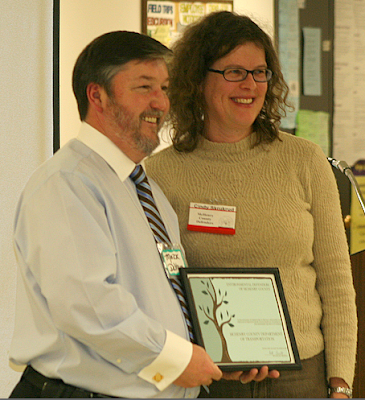 “Our citizens have stepped up and said, ‘We understand.’

“People really want to do the right thing.”

The McHenry County Department of Transportation won the Government Award.

In making the presentation, former Defenders Executive Director Cindy Skrukrud described the worldwide attention his discovery of how to diminish highway salt use by 40%.

The innovation consists of 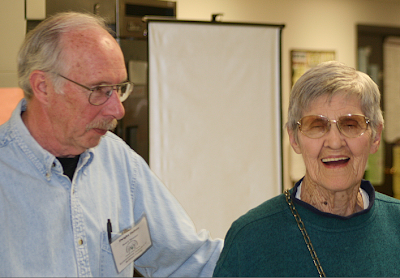 “Once you become an innovator, people bring new things to you to try,” DeVries noted.

Defenders Volunteer of the Year was Huntley’s Dorothy Johnson.

How many hours did she volunteer?

“It’s my home away from home,” she remarked.

He was first Director of the McHenry County Health Department.

He has a wonderful sense of humor. In a land inventory map, he included the one nudist colony. It’s now a McHenry County Conservation District Area north of Marengo.

Having come from the Eastern Shore of Maryland, my family was astounded that McHenry County did no have a public health department until the mid-1960’s.

= = = = =
On top, Dwight Dalton can be seen giving the Theta Award to Lakewood Village Administrator Catherine Peterson. Next, Cindy Skrukrud presents the award to Mark DeVries. Below super-volunteer Dorothy Johnson is recognized by Dwight Dalton.