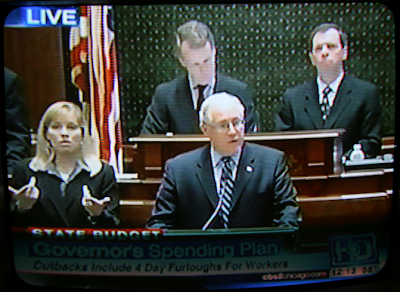 Not before, but right after Rod Blagojevich took office in 2003, he asserted that the state had a $5 billion deficit.

At the time, I thought he was probably adding figures for two years to get that high.

Then, instead of following his predecessor George Ryan’s belt tightening example, Blagojevich and his Democratic Party-controlled General Assembly proceeded to increase spending about $1 billion a year.

It was really over $1 billion a year of new spending because Blagojevich did pare back the state bureaucracy, which saves some money.

He was in office six years.

With $1 billion a year being added to the state budget, doesn’t that add up to the $11 billion that newly sworn in Governor Pat Quinn now says the state is in debt?

At minimum it is a coincidence.

At maximum is is powerful evidence that Illinois Democrats have no clue how to manage state government.

And, let’s not forget the massive fee increase bill the Democrats passed with Republican votes.

The answer that the Democrats come up with now is to raise taxes yet again.

As one hard worker said angrily after learning that the family tax burden would increase about $1,500 a year under Quinn’s plan:

“I’m tired of working my butt off
so others can sit on their butts!”

I’m sure Quinn would accuse this hard worker of being “mean spirited.”