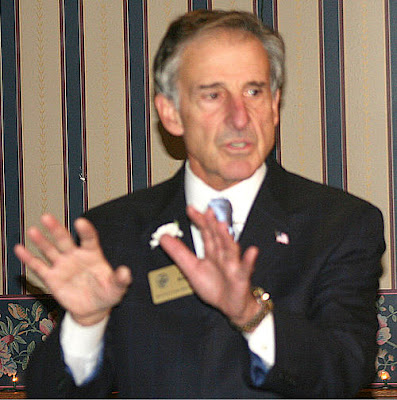 Dalby is due in court today to answer for her indictments for official misconduct, theft and theft and computer tampering. The indictments came after a 16-month on and off probe.

Dalby told Keeshan that she did fund raising campaign work, including typing campaign checks and invitations requested by Bianchi, while at work from the beginning of 2005 until the summer of 2006.

She showed the reporter copies of what she did and said she had set up tables for a mid-day campaign fundraiser while being paid by the taxpayers.

Foley was chief accuser of Bianchi’s use of office expense money improperly.

The accusations were investigated by the office of Attorney General Lisa Madigan, which “found no basis for opening a criminal investigation against” Bianchi. 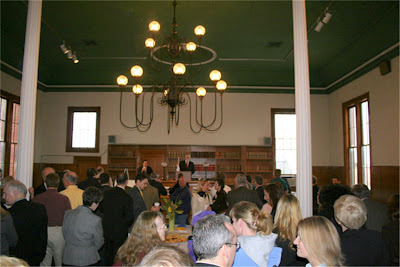 She also threw a Christmas party for former assistant state’s attorneys. Regna was a special guest.

In the fall of 2007 Illinois State Police investigators interviewed Dalby about her taking the computer files. She talked to them without asking for an attorney.

She told the Daily Herald that the state policemen did not ask about the content of the files she took.

After the primary and general elections, the state police came back, requested and got video interviews. Again nothing was asked about the content of the computer files.

“They’re slaying the messenger, not dealing with the message,” Dalby’s attorney, Wes Pribla, told the Herald.

So far, neither the Daily Herald nor the Northwest Herald has delved into the connection Bianchi’s Democratic Party opponent Tom Cynor with the information. Former Democratic Party coroner candidate Dave Bachmann released emails last week from Cynor indicating he was prvy to the charges as well.

The room photo is from Bianchi’s announcement of his intention to run for re-election. It was held in the second floor courtroom of the Old McHenry County Courthouse on the Woodstock Square, the room in which I was sworn in as McHenry County Treasurer in 1996.