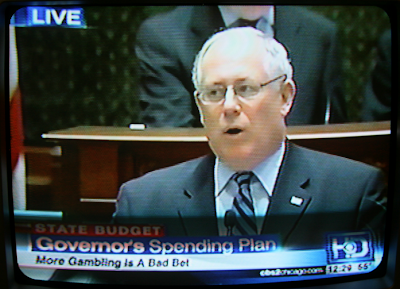 Unmentioned in Governor Pat Quinn’s budget address was what his 50% income tax hike proposal will do to Illinois business.

Here’s what the Illinois State Chamber of Commerce says,

“If this plan were passed, Illinois would have the 5th highest corporate income tax rate in the nation, though we would be close to tied for second. Illinois at 9.7% would be surpassed only by Iowa at 12%, Minnesota at 9.8%, Pennsylvania at 9.99%, and DC at 9.975%. (All three of these states have graduated taxes, but the rates shown are the highest rate for that state.)

“This, in combination with lost incentives, would be one more reason for employers to look elsewhere to avoid Illinois’ long‐standing anti‐business climate.”

Since there are no mitigating increases in deductions for business taxpayers, the tax hike would be at least 50% on those who create jobs in Illinois.

Indeed, if “loopholes” are closed for business, its tax burden would increase by more than 50%.

Talk about a reason to think about leaving Illinois…

Or a reason not to expand or bring a new business to Illinois.