Not only Algonquin Township, but Nunda Township rolled out campaign literature at the Crystal Lake Expo.

Both were found at the Algonquin Township Republican Central Committee booth, which was right on the first aisle of the exhibition.

The booth looked more like a Nunda Township-sponsored one than one put up by the Algonquin Township folks.

True, you could see a sponsor’s sign on top, but the six Team Nunda red and white yard signs dominated the booth. Here you see Algonquin Township Trustees Linda Lance and Lowell Cutsforth, both running for re-election, at the booth. 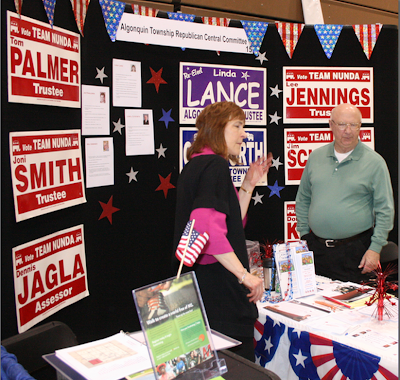 But, back to the literature. 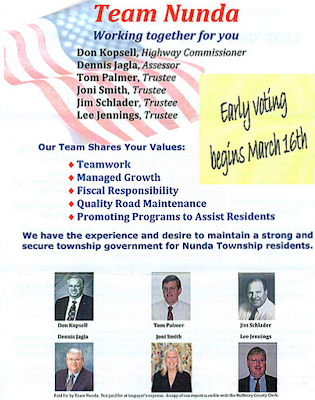 There’s a side with “Team Nunda” candidates listed, even the ones who are not opposed. An “Early voting begins March 16th” is highlighted in pale yellow.

The values the Republicans tout as sharing with constituents are

The reason for ignoring the two Democratic Party candidates for township trustee who are on the ballot (not phrased that way, obviously):

We have the experience and desire to maintain a strong and secure township government for Nunda Township residents.

The other side of the folded 8½ by 11 inch sheet of paper has a pitch for voting for Team Nunda, a web site address and another reminder of early voting.

Strangely, Township Supervisor John Heisler is missing from the candidates listed on the sign, but he is in the endorsement list. Township Clerk Bridgett Porvenzano is not mentioned at all. Both are unopposed, but so are Township Highway Commissioner Don Kopsell and Assessor Dennis Jagla and they are on the sign. 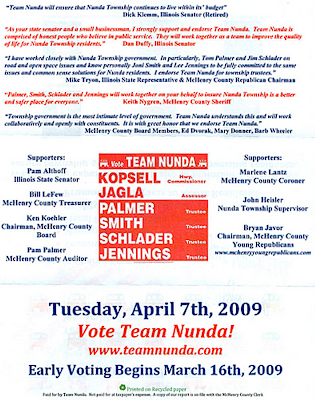 There’s a panel of endorsements and supporters surrounding and above the 4 by 4 foot sign that first appeared prior to the primary election.
They include 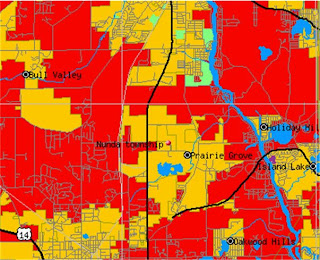 = = = = =
For those of you who don’t know much about townships, they perform three basic functions: assessing, road maintenance in unincorporated areas and hand out local welfare, called General Assistance. Crystal Lake is in four townships. The two major ones are Algonquin and Nunda. The horizontal dividing line is Crystal Lake Avenue. The western part of Crystal Lake (west of our home in Lakewood on Meridian Street, in fact, is Grafton Township. The far Northwestern corner is in Woodstock-dominated Dorr Township.)