On our way back from Milwaukee’s Mitchell Airport, we drove through Woodstock on Route 47.

There was a big back-up as we entered and left Burger King. 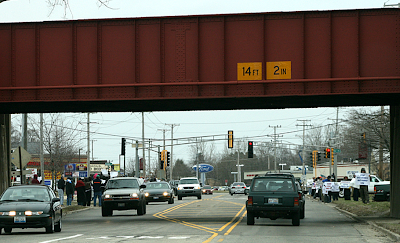 As we paused at the McConnell Road stop light, here’s what I saw framed by the railroad overpass. 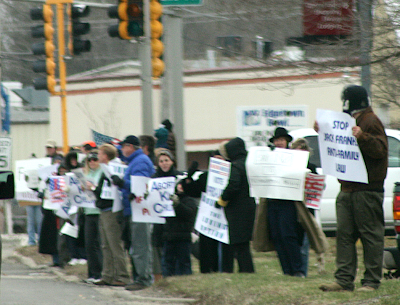 Demonstrators on both sides of Route 47.

There were a lot of people on my side of the road.

The first sign I saw was on the city side of the road.

It was held by a man in a ski mask to ward off the 35 degree temperature and biting wind and said,

There is at least one other that says,

You can click on the photo to enlarge it, but it was taken through the windshield and is a bit fuzzy. 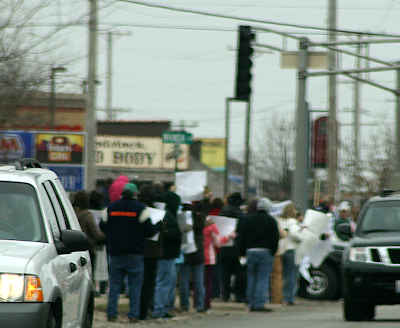 My wife asked if our son knew what that meant.

“Of course, everybody knows abortion kills a child!”

He sounded exasperated to be asked such an easy question.

Most of the protesters seemed to be right in front of State Rep. Jack Franks’ office. 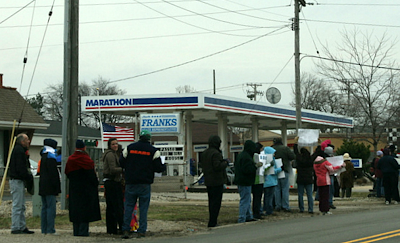 A pickup truck held some youngsters. 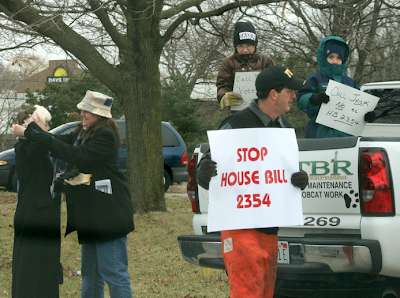 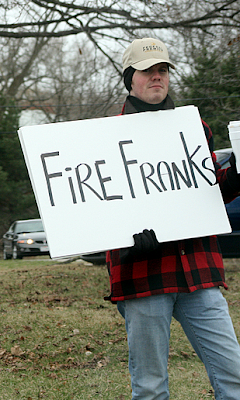 Taking another approach, a man with hat and earmuffs held a poster saying,

Tough to do when the Republican Party under both Bill LeFew’s and Mike Tryon’s chairmanships would not even get a candidate to run.

Maybe next year one of the demonstrators will run for the office. 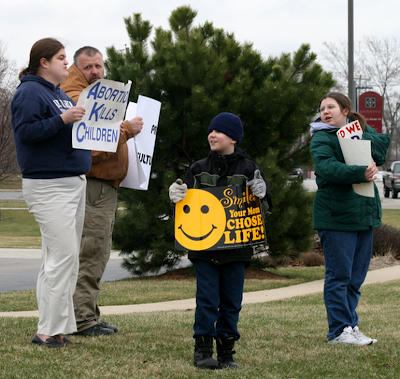 As we waited to turn left on Route 14, we a cluster of demonstrators. A boy held a sign with a happy face saying,

I’ll run more if I get some reports from people who took part in the demonstration. Maybe they will even send me pictures of those who spoke to the crowd.

= = = = =
House Bill 2354 was introduced on Feb. 18th. Jack Franks signed on as a co-sponsor three weeks later on March 12th one day after it was voted onto the House floor on a 5-2 vote by the House Human Services Committee. Perhaps I will be excused for thinking that Franks is positioning himself for a statewide run for attorney general. With his colleague Julie Hamos also jockeying for the attorney general position and having become a co-sponsor the day the bill was introduced, perhaps I will be excused for suggesting Franks has figured out that a Democrat who is not acceptable to the pro-abortion Personal PAC will have a difficult time winning a Democratic Party primary election. Personal PAC has not traditionally been friendly to Franks.

HB 2354 basically puts into state law the ability to have an abortion any time during pregnancy.