Readers may remember the evidence I have posted how the McHenry County Conservation District treats the Crystal Lake area as if it were a rug covered with money.

The MCCD acts as a vacuum machine, picking up money from the greater Crystal Lake area and dumping it around the western and northern edges of McHenry County. Crystal Lake got $90,000 from the $68.5 million 2001 referendum, for instance. Here’s what the rest of the county got.

The perpetual (since it founding) excuse of its appointed trustees is that it wants to buy as many acres as possible and land is cheaper around the edges of McHenry County.

The inevitable result will be the creation of rich people subdivisions overlooking conservation areas. If you doubt my prediction, take a look at where the Cook County Forest Preserve District has bought land. Lots of it is in the northwest corner in a village now called Barrington Hills.

Not a lot of “affordable” housing there. 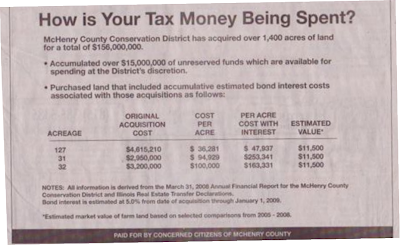 Chick to enlarge the ad.

If the Northwest Herald had lived up to its promise to provide home delivery for the dollar I paid the Saturday before last, I would have found the ad myself.

But the NW Herald hasn’t got its act together. It has not yet delivered one paper from my March 21st subscription.

So when I friend sent me a copy of the ad, I was surprised.

Who are the unnamed Concerned Citizens of McHenry County?

I surely hope one of them sends me an email. (Look way, way down at the bottom right for the email box.)

The per acre cost, including interest, is calculated to range from

The above information was obtained from the district’s 2008 annual report, plus Real Estate Transfer Declarations, the ad says.

Interesting information. I wonder where it comes from.