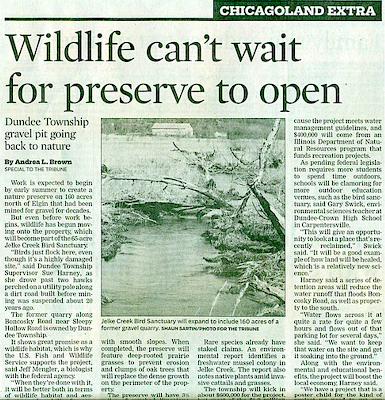 Last Friday, the Chicago Tribune ran an article by Andrea Brown about how Dundee Township has a 160-acre mined out gravel pit.

That reminds me of a hint dropped by Ken Koehler back in 2001 when I got so fed up with the McHenry County Conservation District’s ignoring of the Crystal Lake, Algonquin, eastern Lake in the Hills area that I applied for one of the board vacancies.

Of course I didn’t get selected.

I told the interview committee that my goal was to redress the discrimination against this part of the county by MCCD boards over the years.

I suggested that redress could be achieved by buying gravel pits in the area.

At the time there were several thousand acres of pits between Crystal Lake, Cary, Algonquin and Lake in the Hills. Here’s my dream for the area.

Koehler hinted that the purchase of a gravel pit might be in the conservation district’s future.

Now, eight years later, it seems to have been far, far into its future.

I don’t know about you, but I would rather see mined out gravel pits become parks than sites for subdivisions or row houses.

So, I guess the Northwest Herald ad placers are not the only ones dissatisfied with the way the conservation district buys property.