Island Lake pig farmer Bob Wargaski. he who fought and beat “city hall,” lives outside the village limits, but obviously has “had it up to here” with the way the incumbents have run things there. 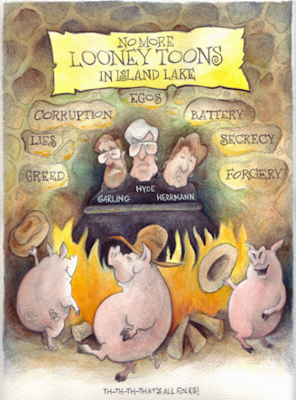 He commissioned the cartoon you see with the message

In the pot are

Wargaski offers the following advice to voters, which is not limited to Island Lake’s:

“Even in times of uncertainty, you still live in the greatest democracy of the world.

“Embedded in the foundation that our predecessors created, is the opportunity for citizens to choose their governing leaders.

“It is all citizens’ responsibility to know the integrity, creed and qualifications of those they elect to represent them. 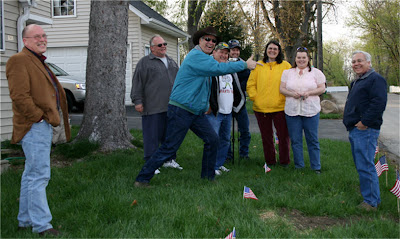 “As you approach your opportunity to exercise your voting rights, make sure you educate yourself on those candidates seeking to lead your local government.

“Do they conduct themselves with integrity? Are they knowledgeable?

“Are they willing to seek the truth?

“You don’t want to elect those with a self-serving credo.

“Your choice will have lasting ramifications on your community.

“One way or another, you will be directly affected by those who are handed the scepter of power, good or bad.

“Long ago my grandfather said to me, ‘Listen to the mouth, but watch the feet, it is a dead giveaway to who the person really is.’”

Click to enlarge the cartoon or the picture of Bob Wargaski using his hand as a gun like two Island Lake village officials said “threatening” tee shirt wearing Vietnam Veteran Greg Kachka before they had him arrested.