Yesterday I wrote a too long article about the McHenry County College MAP engaging the community meeting.

I pointed out the history of St. Louis tax hike firm Unicom-ARC, which $137,750 for the ten-month project.

In my headline yesterday, I referred to the “60” community members. 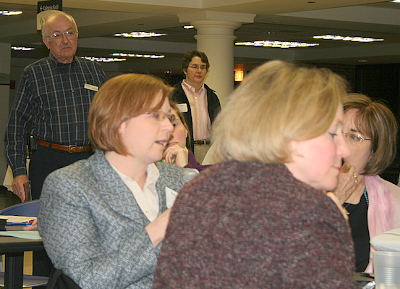 Someone who knows the players tells me that there were less than 25 people without a tie to the college.

A comment that no one in the audience picked up was the lack of growth in college participation by seniors.

With the incredible growth of Sun City (all of which is located in the college district) in the last ten years, one would think McHenry County College would have figured out that giving courses in Huntley would be a way to serve that concentrated population group.

= = = = =
I don’t know most of the MCC employees, but in this photo one can see MCC Board Chairman George Lowe standing back left and retiring MCC Trustee Frances Glossen sitting at the right hand side of the table. That’s two out of the five people in the photo with college connections.