There are six people who figured out sixty days before the election that they could run a write-in campaign and registered such an intention with the county clerk. That’s what a new state law requires.

Two of the six write-in contests are sure winners.

Jeff Mason has filed to run as a write-in candidate for the Crystal Lake Grade School District. Two people are running and three seats are available. With one, vote Mason will elect himself.

Similarly, Stacy Iwanicki, a write-in candidate for the Rural Woodstock Public Library District, will get elected because there are three 6-year seats and only two candidates on the ballot. That’s assuming she votes for herself.

As mentioned in a previous article, Dan Ziller, Jr., is running an independent campaign against the four township trustee candidates nominated at the Republican primary election. 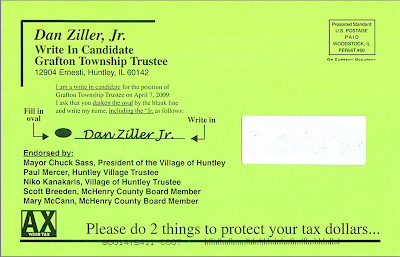 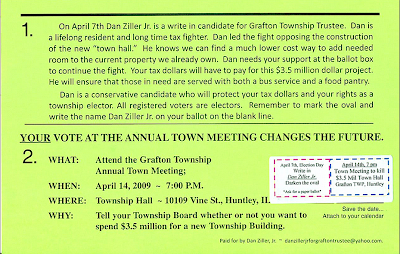 Ziller has a real campaign. Look at his endorsements:

But let me point out that Chicago Sun-Times political reporter Lynn Sweet said my 2002 campaign for governor against Rod Blagojevich and Jim Ryan was “a real campaign.”

That got me 2% of the vote and I was on the ballot.

The same problem of a write-in running against people on the ballot faces Greenwood Township Road Commissioner candidate Tom Borta.

From looking at signs throughout Greenwood Township, I can tell you he has a “real campaign.” Besides this homemade one, there are professionally printed yard signs.

But Borta has three opponents on the ballot:

They also have “real campaigns.”

There are two write-in candidacies in the hotly contested Island Lake village election. Former village trustee Sally Fleissner is running for mayor against John Ponio and Debbie Herrmann. Both are village trustees. Herrmann is an ally of outgoing Mayor Tom Hyde. Ponio has been one of Hyde’s strongest critics. David Meeks is running for trustee against six others who are on the ballot. I don’t know what kind of a campaign the write-ins are waging, but the two factions have full slates on the ballot and seem likely to wipe out the write-ins.

I will repeat, for a write-in to run against someone on the ballot is almost unheard of.

The story of the most famous McHenry County write-in victory, that of Algonquin Township Assessor Forrest B. Hare’s 1973 re-election victory, is contained in these two articles: