A couple of weeks ago I let the four candidates for Algonquin Township Trustee know that I was going to knock on doors in my Algonquin 7 precinct.

I asked for literature to distribute.

Only Linda Lance supplied me with something. You can see it below.

Lance was kind enough to include the names of her running mates at the bottom of her piece. And she points out that none of the Democratic Party challengers has attended a township meeting.

Boy, that’s something I would have stressed in a pamphlet.

I don’t know whether the failure to provide literature by the township candidates is an indication they thought too few GOP precinct committeemen would do anything with it to make it worthwhile to produce it or what.

After working about half of my precinct, I came home for more literature and discovered this post card in the mail box: 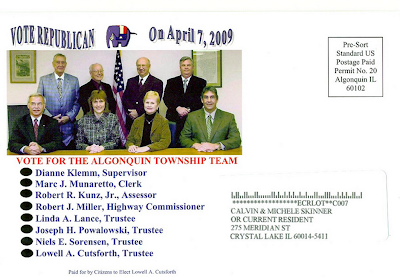 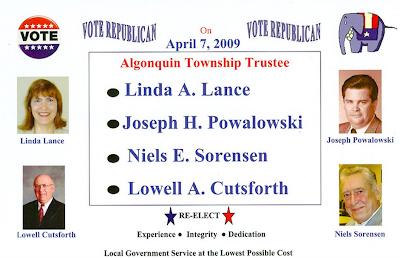 It was paid for by candidate Lowell Cutsforth.

So, pushing myself to finish the 225-home CCAPOA precinct Saturday, so I could avoid what I expected to be a rain and show-filled Sunday, I got to all but a handful of homes on by block.

And, I got to meet some new people, too. It’s my experience that, knocking on doors pretty much every election, I can meet someone from every household over about a five-year cycle. After yesterday’s experience, I would conclude that Saturday is the best day this century.

On Sunday, I opened the Northwest Herald, which finally started arriving 12 days after I signed up at the Crystal Lake Expo.

And, there, as if coordinated with the Saturday postcard was an eighth-page ad, which you can see below:

The Democrats started early, popping up signs in Algonquin 25, a precinct between McHenry Avenue and my precinct, which votes at Lundahl Junior High. 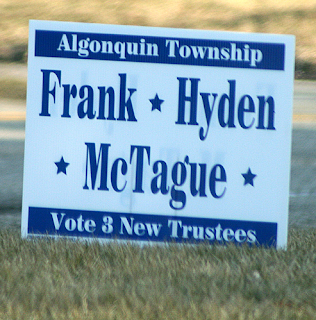 Its Democratic Party precinct committeeman, Maurice Hill, has to be the most energetic one in Crystal Lake, perhaps in the whole county. This could be Hill’s precinct letter, but maybe it’s just addressed to fellow Democrats.

Next, in mid-March. came the first direct mail of the campaign.

The campaign claimed to be making at least a thousand phone calls.

The Dems say they are going door-to-door and being greeted “with enthusiasm.” The post does not indicate whether the canvassers are talking to just Democrats or knocking on doors or independents and Republicans as well.

The Republican candidates for township trustee have signs, too.

But there are two of them. 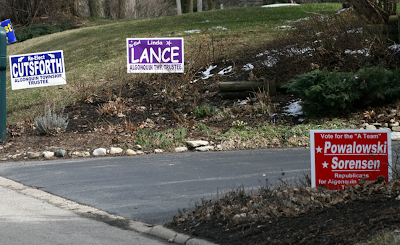 Linda Lance and Lowell Cutsforth share a sign. One name is on one side and the other on the other.

Running mates Joe Powalowski and Neils Sorensen share another one. Both of their names are on each side, but in smaller print.

I wonder why the four do not have had joint yard signs.

I do remember that hard-working Democrat Lake in the Hills Trustee Paula Jensen beat out John Jung in a campaign in which Jung and running mate Virginia Peschke did not run a joint campaign.

Will history repeat itself, as the Democrats hope.

There is a joint sign for the “A” Team on McHenry Avenue near Route 14.

This is the only one I have seen.

Maybe there are more “A” Team signs for the Republican township trustees in Cary, where there is a huge Working Cash bond referendum.