Slim advertising have apparently loosened standards for political inserts at the Northwest Herald.

I can’t remember the campaign (one in the Cary area pops into my mind), but a former managing editor pledged that a political insert would no longer be allowed the day before an election.

The Republicans in Nunda Township, labeling themselves “Team Nunda,”
paid for an insert that I didn’t get, but discovered while reading the paper at the First United Methodist Church of Crystal Lake. The church is located just north of the Algonquin-Nunda Township line, which is Crystal Lake Avenue.

So, it appears the local GOP candidates didn’t waste their money on the Algonquin part of Crystal Lake.

The Team Nunda sign is reproduced on both sides of the three color campaign piece. 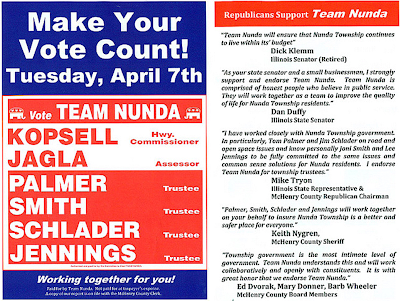 are featured on one side. 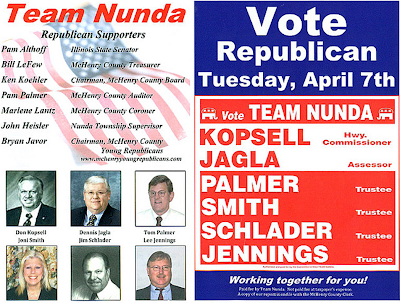 The other side has endorsements from

And there’s a big