Democrats made a determined effort to win all of the big money offices in Greenwood Township.

Since the township is not large enough for Republicans and Democrats to run on their own party labels, all the candidates were listed as independents.

He was defeated by current Township Clerk Barbara Klasen 61%-39%, a 335-vote margin (prior to the folding in of absentee and early votes).

The Democrats candidate for the well-paying road commissioner post was Tom Ganka.

The pay really must be good, because four men were scrapping for the job. 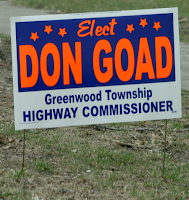 Don Goad, the candidate endorsed by road commissioners, current and retired, in most of the populated townships won the 4-way race. He got almost 43% of the vote. That was 705 votes.

His closest challenger was Tom Wyse, who received over 26% or 438 votes. Depending on whom you talk to, Wyse was either let go by Greenwood Road Commissioner Roger May for financial reasons or because he was getting ready to run for road commissioner. May endorsed Goad.

Democrat Tom Ganka came in third, getting only 223 votes (with maybe more to come from absentee and early voting).

There was a vigorous write-in campaign by Tom Borta. At maximum, he got 282 votes. 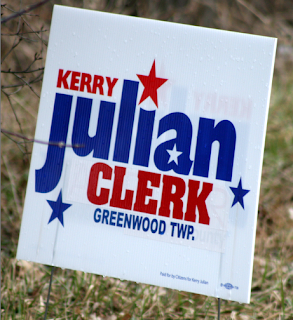 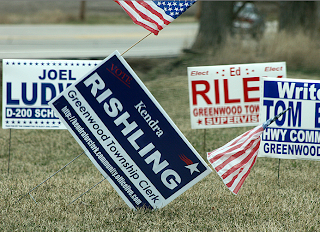 The closest challenge came from the most experience Democratic Party candidate, Kerry Julian. Julian ran as a Democrat for McHenry County Auditor and did better than any other countywide Democrat.

Julian received 42% of the vote in his challenge to incumbent Pam Palmer.

Julian got over 46% of the vote for township clerk, but Kendra Rishling was victorious.

Undoubtedly, Julian will be a candidate for another office, perhaps county board.

Unlike in Nunda and Algonquin Townships, the Democrats did not file any township trustee candidates in Greenwood Township.