I didn’t get this posted last night. Still recovering from my early Wednesday morning election coverage…which still is not completed.

Here’s a sentencing that you might find of interest:

McHenry County State’s Attorney, Louis A. Bianchi, is pleased to announce that on April 8, 2009, Defendant Eulalio Haro was sentenced to twenty years, Illinois Department of Corrections for the June 24, 2006 crash that killed Dean Knospe. Haro was convicted of the offenses of Aggravated DUI, Reckless Homicide, and Leaving the Scene of an Accident Involving Personal Injury or Death. 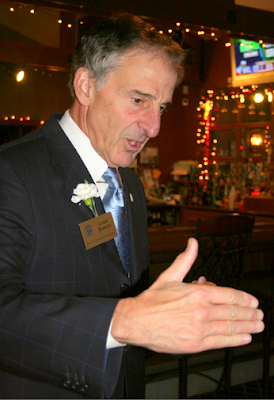 Haro’s Chevrolet Cavalier struck a Harley Davidson Ultra Classic driven by Dean Knospe, 71, about 4 p.m., June 24, 2006 and dragged Knospe several hundred feet without stopping. Haro told investigators that he left the scene because he did not have a driver’s license.

At the trial, Haro’s attorney disputed estimates that his blood-alcohol level was more than three times the legal limit at the time of the accident. The analysis was based on the small amount of alcohol remaining in Haro’s system about 20 hours after the crash.

Haro was previously deported to Mexico in March 1995 after serving a four-year prison sentence for a drunk-driving accident that killed his brother.

Since then, he was deported a second time. He was also was convicted of driving drunk twice in McHenry County in 1998.

Haro will be required to serve 85% of the Aggravated DUI sentence. He will once again face deportation proceedings upon his release.

This is the second DUI fatality case in less than a week that has drawn a double-digit prison term in McHenry County. On April 3, 2009, Defendant Antonio Escorza was sentenced to ten years, Illinois Department of Corrections for a DUI fatality.

And, you want some irony?

The Northwest Herald’s Julian Duchnowski reports that the man killed was active in the Illinois Minutemen.

I haven’t seen so many comments under an article on illegal aliens since the Illinois Minutemen Project hosted Ohio’s Allen County Sheriff Daniel Beck at McHenry County College during the fall of 2007. The moderator, Rosanna Pulido, went on to run as the Republican candidate in the 5th Congressional district against Mike Quigley.

Bianchi wrote that Mick Combs was the attorney on the case.

“He is the same prosecutor that got the conviction on the re-trial of Smith. (Few lawyers could accomplish this with all the inconsistencies from the witnesses). I am proud to work with him and all the other outstanding attorneys in our office.”