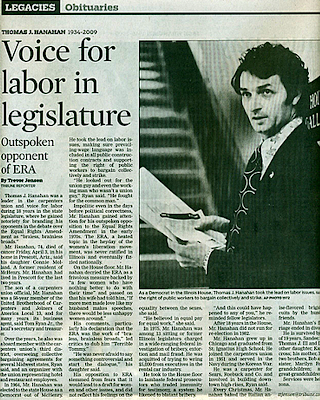 He moved to Park Ridge. I don’t know if that happened before or after his term ended in January 1983, but that’s the address I remember when he was on the payroll of Chicago Democrat Bill Laurino, one of his legislative contemporaries not negatively affected by the imposition of single member districts.

Hanahan knew he couldn’t get elected in McHenry County running one-on-one with a Republican so he abandoned his residence of convenience. (And, no one did until Jack Franks defeated appointed State Rep. Mike Brown after a bitter 1998 primary election with Steve Verr.)

The son of a carpenters union official, Hanahan had been told to move to McHenry County in preparation for the 1996 election cycle.

Rural Union’s Billy Giblin and he represented McHenry County after the 1964 bed sheet ballot, when reapportionment was not accomplished and all candidates ran statewide.

Both Republicans and Democrats slated candidates for two-thirds of the seats. The Democrats won the legislative contest with a slate headed by untested Adlai Stevenson III.

Republican A.B. McConnell of Woodstock was the odd man out in that 1964 election, not having had enough clout to be listed in the top half of his party’s candidates.

In 1966, when three-member districts again were drawn, Hanahan beat out Giblin, who served only one term, to become McHenry County’s Democrat.

His trade union buddies helped him build the house he lived in while serving in the Illinois General Assembly.

The district was composed of all of the county and points south, west and southwest into DeKalb. The other district included Grafton and Algonquin Township and everything straight east to Lake Michigan. I can’t remember if it was one or two township high.

One of the big issues in the 1971 General Assembly was the authorization of the unionization of teachers.

It was a key issue in 1972campaign, when I ran for the GOP nomination for state representative against former Belvidere Mayor (“Get More with Les”—really; that was what his cartop said) Les Cunningham and northern Dundee Township’s R. Bruce Waddell.

Waddell had won a special election when Dundee nursery owner Jack Hill was killed zipping his motorcycle around his business property at the northeast intersection of Routes 31 and 72 and hit his head on a pipe sticking off the back end of a truck. There was a closed casket.

One of Hill’s great admirers and supporters, McHenry’s Goldwater-inspired Tom Davis ran to replace him, but Waddell won.

At any rate, in the teacher unionization fight, Hanahan was on the side of the Chicago Teachers Union and its statewide affiliate, the Illinois Federation of Teachers. After all, those unionized teachers were connected with the AFL-CIO and the Illinois Education Association wasn’t.

Only the Woodstock High School District was composed of IFT members. All the other area district’s teachers were members of the IEA.

The IEA found an Algonquin attorney named Joseph Coleman. The IEA used him to “teach Tommy a lesson.” They put a precinct worker in every precinct and gave Hanahan the scare of his life.

The election turned out this way:

After that, Hanahan was much more responsive to the IEA’s desires and, while I don’t know this for a fact, probably was the bridge between the IFT and the IEA for the collective bargaining bill that eventually passed.