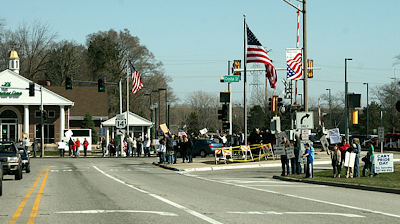 When my son and I got to Cary we discovered people who had been at the Crystal Lake demonstration, 550 strong according to Libertarian Party Chair Dave Brady of Wonder Lake.

This was the third McHenry County TEA Party I visited April 15th. The second was on Route 62 in Algonquin. We parked at Kelli’s Cuckoo’s Nest across from the Metra station. She offered free pizza to protesters. (All photos can be enlarged by clicking on them.) 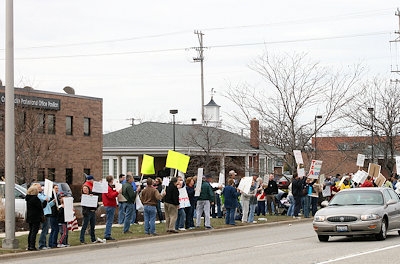 When I recognized some protest signs and asked what had happened in Crystal Lake, I was told that the Crystal Lake Police closed down the demonstration at one. 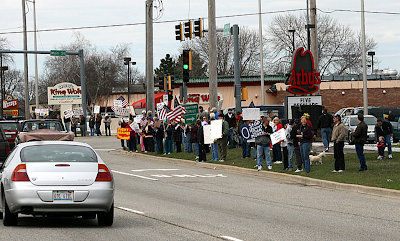 Apparently, Crystal Lake requires a permit and an insurance policy if more than 50 people are going to demonstrate and organizer Jim Thompson said his demonstration would be from noon to one. 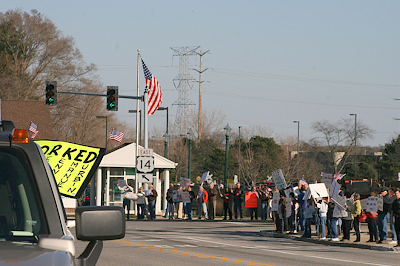 So, a number of people just drove down the road to Cary. 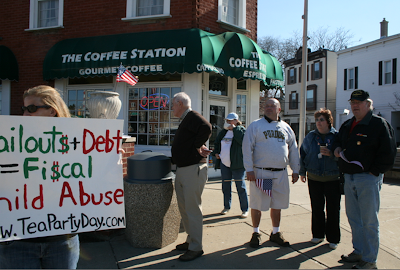 His location, across Main Street from the train station, didn’t attract many demonstrators. That was because people figured out that more motorists could see their signs from Route 14.

But Bobrytzke is the reason the demonstrators were there.

He stepped out in front and the rest of us followed him to bring the message to homebound commuters in Cary.

And, it’s a superb location for a protest, because not only motorists, but those taking the train could see their signs.

I’m sure the Metra engineers were not blowing their horns because of the signs, but, then again, I don’t ever remember hearing a train horn blast in Cary before. 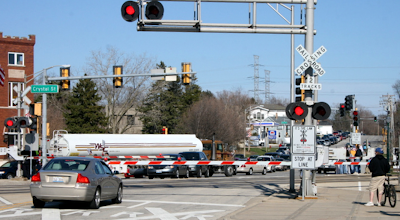 Again, big trucks blowing their air horns brought a thrill to my body. Above you see a Crystal Lake-based W. Smith Cartage gasoline truck “blowing”around the corner past the old village hall. 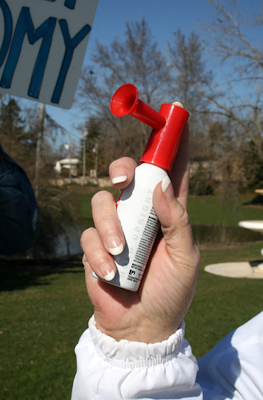 Sometimes when the trucks and cars were not blowing their horns enough for one sign carrier, she pulled out a tiny air horn to make some noise.

Not that it was silent for long stretches. 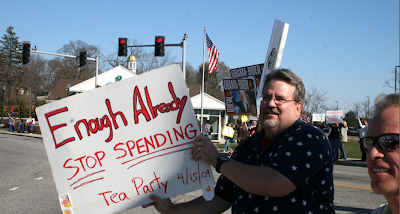 This man was the chief horn honking cheer leader. He was so persistent. 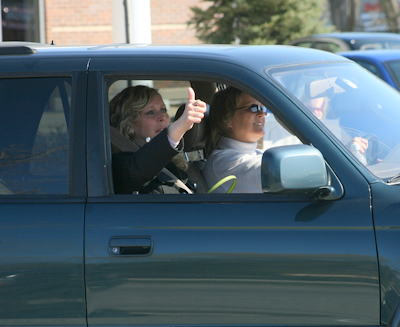 And, when the folks on the street couldn’t get a honk, there were people like this lady with open windows giving the sign holders a “thumbs up.”

How far did people come?

This man, a sign shop owner from West Frankfort, IL, came up to Palatine to help out a buddy and they both came up to Cary for the demonstration. 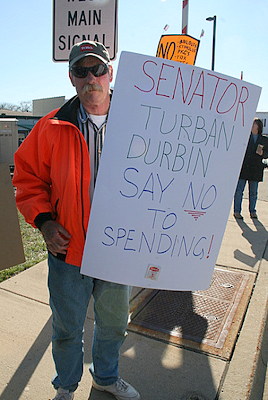 I found an anti-U.S. Senator Dick Durbin sign in Cary. 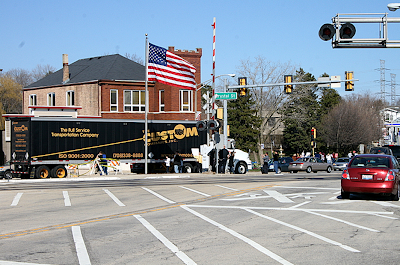 Every once in a while another horn-blaring semi would breeze through town. Here’s one from Custom Companies. 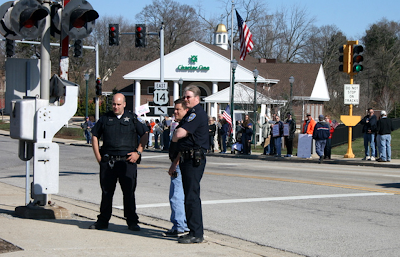 As in Crystal Lake, a police presence was evident. In Cary, they weren’t in cars. They were standing in full view of the demonstrators. Pretty easy duty. 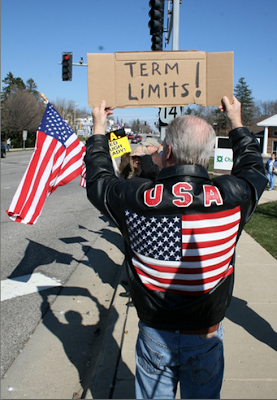 “Term Limits” were the answer to one man.

Another man had the simple message of 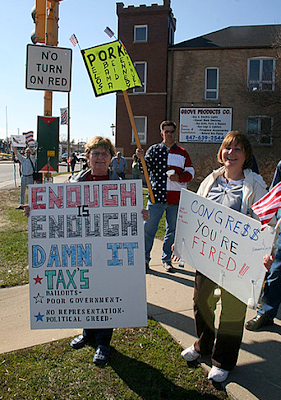 A bit longer, but quite understandable message was

ENOUGH IS
ENOUGH
DAMN IT 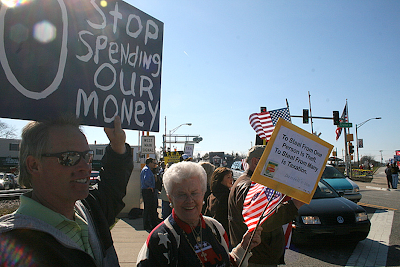 One of the woman who drove down from the Crystal Lake event was pro-life leader Irene Napier. Her sign said, 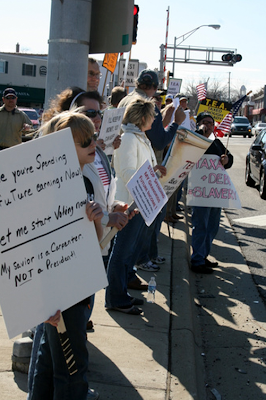 Next to her on the Southeast corner of the intersection I saw the above. 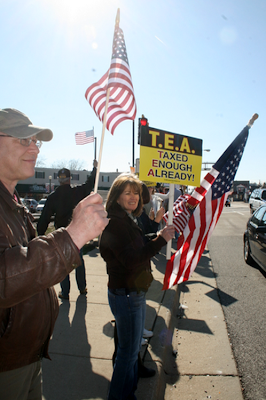 There was one of the few non-homemade signs nearby. 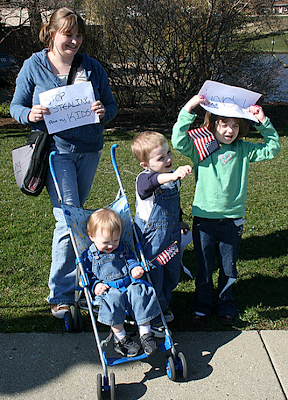 A family of four was on the north side of the street. Two flag wavers and two sign carriers. 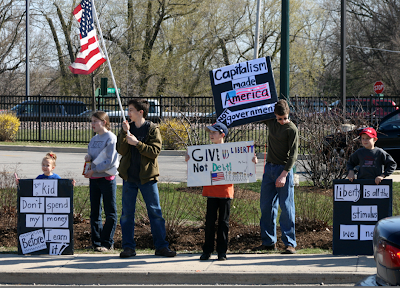 They could see this scene across the street if they looked. I like the sign held by the little girl saying,

I’m a kid.
Don’t Spend
My Money
Before I Earn
It! 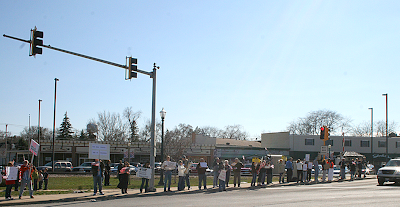 A longer view of that side of the street showed this. 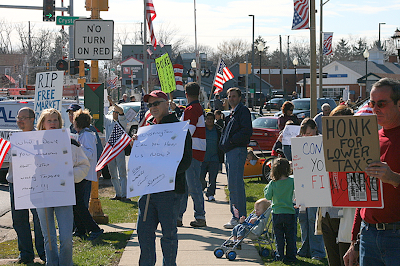 It was crowded in front of the little park with a pond next to the old Cary Village Hall. 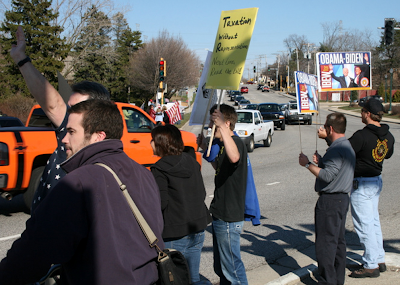 There were two misplaced Obama supporters standing on the traffic island next to the railroad crossing. They were electricians whom I suppose were not working on tax payment day.