Warning: Parameter 2 to wp_hide_post_Public::query_posts_join() expected to be a reference, value given in /srv/users/serverpilot/apps/wordpress/public/wp-includes/class-wp-hook.php on line 292
 Why Is Mike Skala Breaking His Campaign Promise Not to Sit In on the Huntley School Board’s Secret Sessions Discussing Teacher Negotiations? - McHenry County Blog ↓
McHenry County Blog Home 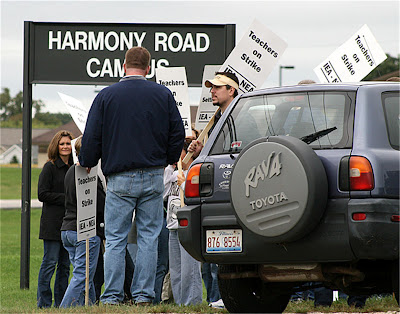 One of the topics discussed was current contract negotiations with the teachers union, the H.E.A., short for the Huntley Educational Association.

You thought those were over, didn’t you?

The strike came and went. After much delay, the HEA finally signed the contract its members overwhelmingly approved (before, it seems, understanding what it said).

The board is in current negotiations with the teachers union on modifying the just signed existing contract to include early retirement benefits, including expensive health insurance.

The union wants taxpayers to pay for extra early retirement benefits when a teacher has 15 total years in the teaching profession, not all necessarily in Huntley.

Incredibly, newly-victorious-over-Larry-Snow school board member Mike Skala was in on the secret meeting.

Perhaps he forgot what he put on the “Position” page of his campaign site (click to enlarge; what’s quoted is at the bottom of the page): 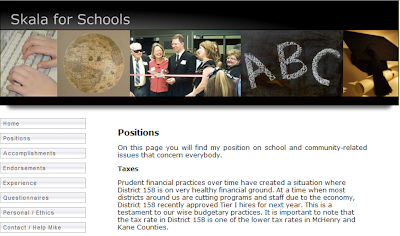 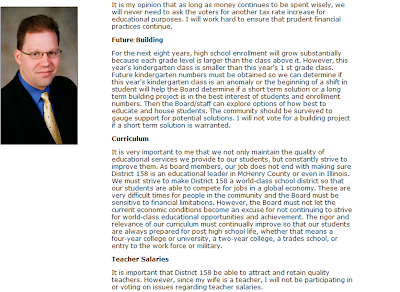 It is important that District 158 be able to attract and retain quality teachers. However, since my wife is a teacher, I will not be participating in or voting on issues regarding teacher salaries.

Perhaps he forgot the following from the Daily Herald’s endorsement of him over Larry Snow:

“Skala’s critics, primarily led by Snow, note that Skala’s wife is a teacher and has been a union official in the district, questioning why Skala at one point voted on a teacher’s contract or was anywhere near negotiation sessions.

“It’s a valid concern and, when initially raised more than an election ago, he took steps to ensure he is not part of those tricky teacher contract negotiations.”

Well, the election is over.

Skala has two years to sit in on board meetings while items vital to his wife, a Huntley High School French teacher and former teacher union official, are discussed in closed session.

Can the taxpaying public reasonably expect husband and wife not to discuss topics of common interest?

Even if it would be a conflict of interest to do so?

After all, Skala did vote for the contract that gave his wife a 50% raise over its life.

Would it not be more prudent for Skala to absent himself from these meetings, whether or not he has the “legal” right to attend them?

(And what kind of law would let the spouse of school teacher have influence on or information about negotiations with her union?!)

Imagine the union outrage if their private strategy and how-they-make-decision sessions could be communicated directly back to the Board.

Board member Larry Snow was asked to comment on Skala’s including himself in talks on contract modifications:

“It’s a common sense conflict of interest, which Mr. Skala chooses to ignore. He’s done it for years; he did it Thursday night.

“It’s outrageous if you think about it. Let’s see if any reporters or newspaper editors publicly call him on it.”