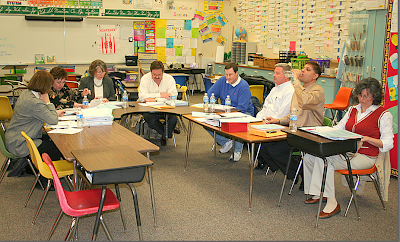 Even though, no because the board majority will shift as a result of April 7th school board election results, the outgoing board decided to give District 46 School Board Superintendent Mary Fasbender a raise and a contract extension through mid-2011.

At least that’s what I think happened.

The school board majority wouldn’t go farther than the wording of the motion that was passed in explaining the effect of what the did.

The most important motion was to align the superintendent’s salary and benefits and not to exceed the tax cap rate.

When Northwest Herald reporter Crystal Lindell asked for a copy of the contract, board member Laura Domoto said it had not yet been approved or signed by either side.

If I could characterize the board majority’s attitude in one word, it would be

In short, not a board that wanted the public to know what it had just done.

Lindell said she would file a Freedom of Information request.

This, you may remember, is the school board that ran me out of the last school board meeting I attended. They called “Officer Friendly.”

I laughed too loud.

At least I think that was the reason. If you check the link above, you’ll see my taking pictures through the Venetian blinks really irritated some of those inside the secret meeting.

It led to the WANTED poster that Crystal Lake Heck of a Guy blogger Allan Showalter developed. I liked it so much, it’s the one you see to the bottom right or here.

The Northwest Herald had a Northwestern University intern covering the meeting, which led to an article headlined

But, back to last night.

It really was not surprising to see a disappearing board majority extend its influence.

What was most interesting to me was the woman who was shouting at minority board member Charlotte Kremer two years ago, now Board President Karen Bowman, was now aligned with her in opposition to giving Superintendent Fasbender the raise and contract extension.

I know that politics consists of a series of shifting alliances, but this shift surprised me. Really surprised me.

Bowman’s opposition was made known only by her negative vote.

“I do not agree with the salary.

“I think the salaries should be frozen for the coming year due to the economic situation.”

“You are trying (to maintain) continuity with the extension of the contract.

“(This is) in violation of the Open Meetings Act.”

“Our legal counsel has validated our agenda,” Domoto replied.

“I did not see any writing from a legal counsel,” Kremer countered.

“The community did not want continuity. You’re not representing the community if you vote on this today.”

After the meeting she said,

Attempting to explain the near opaque compensation increase just approved, Kremer said that it involved averaging increases in the Cost of Living.

Since 2009 was a mere one-tenth of one percent, the board and superintendent must be counting on inflation for Fasbender to get much of a raise.

Before I arrived there was more irony.

Tom Bieschke. the junior high school’s technology teacher-coordinator who pleaded for his job two years ago has been elected to the school board, having soundly beaten (702-284) Manish Shah for the two year term, spoke to the board. Shah at least acquiesced in Bieschke’s not being given tenure.

Bieschke, of course, recognized the old board still had the authority to do things like raise the 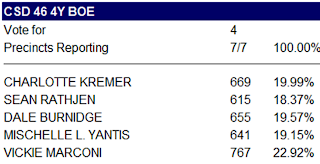 superintendent’s salary and extend her contract, but thought it was inappropriate, considering the way the balloting turned out.

She made the same points, but is on the side of the current board majority.

You can see from 4-year term results that newcomer Vicki Marconi ran first with 767 votes.

She was followed by now majority bloc member Dale Burnidge, who got 655 votes.

While all the outsiders won, the district is obviously pretty evenly split.

= = = = =
You see the full board on top after they came out of secret deliberations on District 46 Grade School Superintendent Mary Fasbender’s raise and contract extension. During most of the meetnig she was inside with the board members. She is seen waiting to be readmitted in the next photograph.

Officer Friendly is seen next by the finance guy, who left for Lake Bluff or some place nearby. Board President Karen Bowman is below on the left. To her right, slightly lower in the story is Charlotte Kremer.

Laura Domoto is down a bit on the left hand side of the page.

The two men facing each other were opponents for the two-year term. Manish Shah is on the left, Tom Bieschke is on the right.

The smiling woman is Mischelle Yantis, being congratulated on her election to the board.

In the blue sweater is Dale Burnidge, re-elected to the board. The man looking over his glasses is Stephen Todd, who did not seek election. The gray haired gentleman is Sean Rathjen, who ran for a four-year board seat and placed last.

And seen in the photo credits is the elementary school motto, I guess. It says,