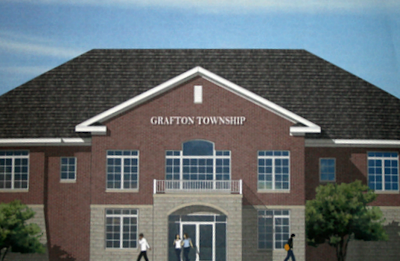 Right then, I figured only a court case could stop the building of a new town hall and garage because all of the current and newly-elected township trustees, even incoming Township Supervisor Linda Moore’s running mate Jerry McMahon, were visibly in favor of the proposal.

After McHenry County Circuit Judge Maureen McIntyre entered her Temporary Restraing Order April 16th at attorney Jim Bishop’s request, she observed that, having seen the pleadings, the attached affidavits and exhibits, the plaintiffs had

You can read the Temporary Restraining Order issued April 16th yourself by clicking on the images below. That action will enlarge them; same with other images. 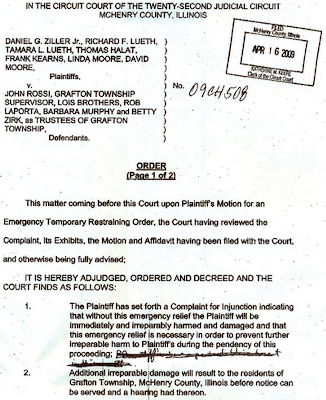 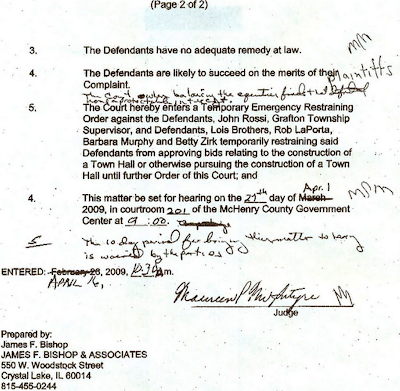 That doesn’t sound too good for the folks that want to build a new township hall, does it? 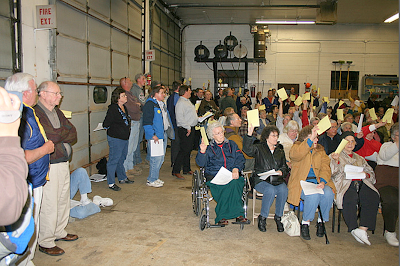 Let’s examine what was presented the judge.

There were minutes from the April 10, 2007 Annual Town Meeting in which

“Moderator Kelly called a motion to grant authority to the township board to purchase real estate property for the purpose of constructing a new Township site.” (Emphasis added.)

No mention of authorizing the construction of a new building.

Note that the word “site” is used. Under no use of that word I have ever heard does “site” mean “building.”

A year late on April 8, 2008, the only mention on the subject is the following:

“Dan Ziller, Sr., requests the following be placed in the official record:

“Any sale of property, any negotiations or transactions (Road District/township) the public must be notified.”

The question of constructing a new building was put to the electors this year and it failed 70-70.

While the motion asking whether to let the construction contracts was passed 70-64, it seems to me that approval of building a new town hall has to come before letting the contracts.

As Bishop told me,

“Somebody’s got to approve that.”

So far, nobody has, except the township board.

On top of that, a petition has been filed requesting a referendum on the question. That was on February 27, 2009, and not a word was mentioned of it at the town meeting.

The suit, with lead plaintiff being unsuccessful write-in candidate for township trustee Daniel G. Ziller, Jr., asserted that a new township hall may not be constructed without referendum approval at the polls.

Bishop says it is “mandatory that the township clerk shall file the petition for the referendum at the next general election.”

That would be in November, 2010, guaranteeing a large turnout.

So, where are things now?

The so far successful suit asserted that the “Electors,” not the township board have the power to regulate “the use of corporate property” and further

“requires a township desiring to build a town hall and when said town must borrow money and issue a bond for that purpose, Electors must present the issue to an Annual Meeting of Electors and authorize a referendum on the bond issue.”

In other words, no approval by the Electors at a town meeting or in a referendum, no authorization for the township board “to enter into contracts for the construction of a town hall as required by statute.” 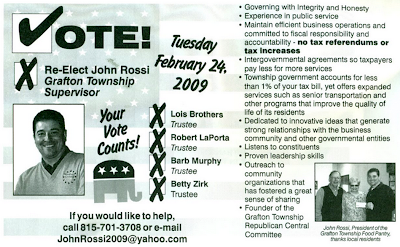 Of course, no referendum was conducted.

Indeed, Rossi stressed that in bold face type in his post card to voters, which you can see here (click to enlarge the image and click here to see my analysis of its contents, especially his claim that one can pay off $3.5 million without people’s paying more taxes than they otherwise would have paid).

But, Rossi and his township board plowed ahead with his plans and Moore started asking the question

Why does Grafton Township need a 3.5 Million Dollar Township Hall?

seen on her banner at last weekend’s Huntley Chamber of Commerce Expo.

Opposition to the new $3.5 million (plus over $1.5 million interest) township hall and garage, of course, was made the cornerstone of Linda Moore’s narrow, 30-vote victory over one-term incumbent John Rossi.

The Temporary Restraining Order entered by McIntyre will prevent the board from letting contracts to build the new township hall.

The next court date, at which Bishop will try to convince the judge to make the restraining order permanent, will be held Monday, April 27th.