Illinois House Republicans had been devastated in the 1974 Watergate elections. They held onto just 76 out of 177 seats.

“been taken for a ride by the CTA”

Both incumbents Mike McClain of Quincy and Zeke Giorgi from Rockford had taken a well-published tour of the Chicago Transit Authority.

With publicity from some of us folks in the suburbs who were still hopping mad about being forced into the Regional Transportation Authority, the two GOP challengers used the CTA bailout to lash their opponents. (Anything favoring Chicago is a sure winner outside of the Chicago metropolitan area.)

McCain lost and Giorgi ran third out of three for the only time I remember. 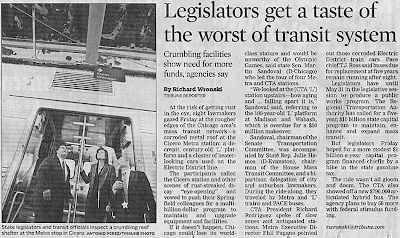 From the Chicago Tribune article above, printing on Saturday, April 17th, I’d assume that someone paid for legislators to come to Chicago to tour the CTA. If past practice holds true, visiting legislators were also treated to some more entertaining venues.

All members of the General Assembly used to have passes to all the museums in town, for instance.

I wonder if this decades’ ride on the CTA will yield results similar to those in 1976.