I was more than fed up with the way the McHenry County Conservation District had borrowed $39 million without asking for permission at the ballot box after Lee Daniels and Pate Philip passed the tax hiking bill numbered Senate Bill 368.

That was the bill that gave tax districts that had behaved badly by taking out loans prior to the Tax Cap’s going into effect without asking for voter approval to continuing doing so forever.

It could be described as a revolving credit card which we taxpayers will never see paid off. 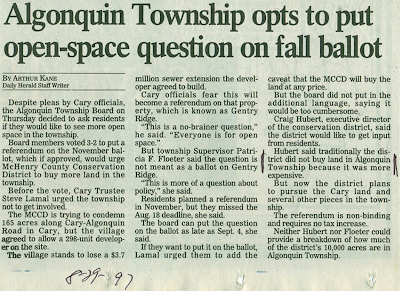 So, when MCCD trustees actually decided to put a referendum on the ballot the year after I got kicked out of office, why was I disturbed?

I went down into the catacombs, which my wife will have put in a dumpster when I die, and found a Daily Herald article from August 29, 1997. It which answers the question in one sentence.

Reporter Arthur Kane was writing a story about the Algonquin Township Board’s putting an advisory referendum on the ballot asking whether voters wanted the Conservation District to buy more land in Algonquin Township.

MCCD at the time was trying to condemn what was then being called Gentry Ridge, but which most long-timers will remember as the ski resort owned by Henry Carroll called Fox Trails. I knew the property pretty well because my good high school friend Tom Carroll lived there before his father built the resort.

In any event, here’s the sentence from the story:

“(MCCD Executive Director Craig) Hubert said traditionally the district did not buy land in Algonquin Township because it” was more expensive.”

Any dim bat could tell you that land in the Southeastern-most township in McHenry County would be the most expensive. It’s closest to Chicago.

But, that was and is no reason to spend virtually nothing in the most populated township in McHenry County. 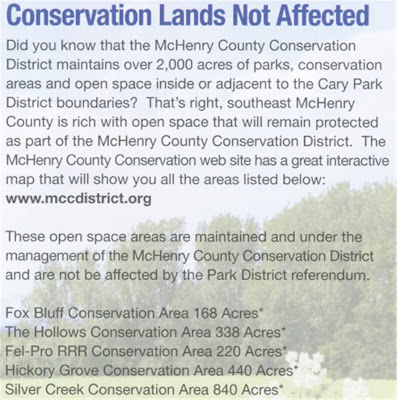 Cary has made out pretty good with

The rest of the township can boast of a bike path and the Lake in the Hills Fen, which will finally be accessible from Crystal Lake behind CVS Pharmacy.

So, if you get the feeling that I think the money from my immediate area has been spent elsewhere, you would be correct. Virtually none of it was being spent where most of the people in my state rep district lived, which was south of Crystal Lake Avenue in Algonquin and Grafton Townships.

Hence, this re-entry into the political arena in 2001: 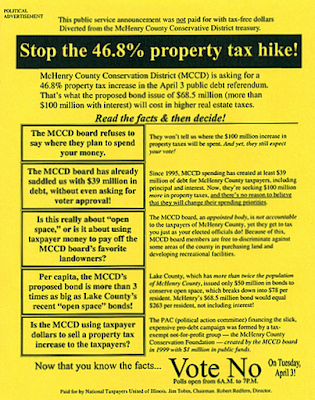