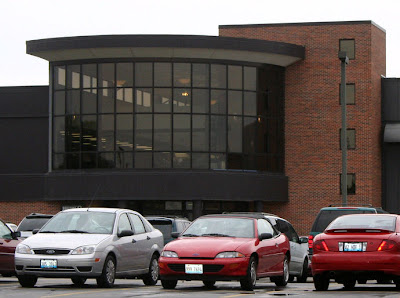 In the “Are You Nuts?” category is Northwest Herald reporter Brett Rowland’s story about last night MCC Board meeting.

McHenry County College folks get quite irritated when I call it a “junior” college.

Of course, that’s what it was created to be, this witness remembers. When discussions were going on to determine its name, however, the board decided to leave that word out.

Somewhere along the way, college folks decided they wanted to be called a “community” college. I guess it sounded more prestigious.

But, the McHenry County College board acts like a “junior” college much too often.

Community input is only wanted under tightly controlled circumstances under the $137,750 guidance of tax hike experts Unicom-ARC out of St. Louis. The community is held in such disdain by the board that the subject of public comments at board meetings is not even recorded in the minutes.

Consider the baseball stadium fiasco. Secret meetings, of course. The public was not allowed to see the details of the deal and an insider non-bid contract forbade competitive bids or contracts the public could examine. And there was a competitor out there.

Months went by before the public was informed of the college’s plans. And months more before more or less meaningful details were released to the public.

For almost the entire debate prior to the city council vote, the public was led to believe that the baseball stadium would bring in 64% of the project revenues. That’s what the Northwest Herald reported MCC President Walt Packard said in early June, 2007.

But, he admitted to me in March, 2008, that he misspoke in that interview. No correction was ever run in the Northwest Herald.

64% is significantly more than what the baseball stadium expansion would cost, it was argued. The baseball team would subsidize the nursing program.

But that was false.

The first ERA report seemed to say the answer provided these figures for the baseball part of the proposal:

Does anyone think the fact that the baseball stadium would not even pay its own way would have been a deal-breaker, if made public?

And consider the top secret, hush, hush, almost 12-month process of considering selling a 400 foot by 400 foot corner of MCC to BMB Communications Management on which to build the tallest free standing radio-TV broadcast tower (1,500 feet) in the country.

Still no meaningful details about the college’s consideration of the project have been released. Just the proposed contract and information that the prospective buyer wishes the public to see.

We ordinary citizens, you see, are not smart enough to evaluate any such due diligence on our own…assuming there was any due diligence…of which there is no evidence on the public record except for insurance concerns.

The first night BMB came to a board meeting way back in February 2008, I and others were illegally threatened with arrest while standing outside the college’s secret meeting and kicked out of the building.

That was after a college security guard got a cell phone call from within the board meeting room.

Before that, Packard’s moving the American flag to block my view of the meeting ranks as one of the most bizarre events in my 42 years of interaction with McHenry County officials. (That’s his head behind the flag.)

If the tower is built, the public will remember Packard as the man who led the way to the landmark that will identify the college’s location from 30 miles out. The bright white and red strobe lights will be impossible to miss.

But, there still is nothing anyone can look at to see what it will look like that is anything close to reality.

MCC board members apparently acting like a junior college board again last night.

And, I considered attending the meeting, but thought it would be boring. Guess I should have read the revised agenda.

Brett Rowland’s article reports the board, which had strangely named Walt Packard, “President Emeritus,” when he resigned at February’s meeting to take care of his ailing wife

It seemed strange at the time.

Here’s what the press release said:

“The Board of Trustees of McHenry County College and Dr. Walt Packard wish to mutually announce that Dr. Packard will be stepping down as the College’s President and assuming the position of President Emeritus effective February 26,2009.

“The Board greatly appreciates Dr. Packard’s service, and acknowledges his contributions, to the College and the College community as President.

“The College will continue to move forward on initiatives begun under Dr. Packard including the Academic Quality Improvement Program, implementation of the new ERP system, and the McHenry County College Promise.”

Included in the press release was a statement from Packard, which concluded with

“I look forward to serving in my new role as President Emeritus.”

Over $200,000 in cash benefits, plus health insurance for him and his wife.

Quite a golden parachute.

The best comment below the Northwest Herald article came from MohawkChieftain:

“Maybe we can hang the lot of ’em from their new tower!”

“Speaking of wasted tax dollars, is it really necessary to hold tonight’s President’s Reception at Boulder Ridge Country Club with hors d’oeuvres beginning at 4:30? Don’t we already spend our tax dollars on the campus buildings which will, most likely, have empty conference rooms at the same time?”

Interim college President Brian Segar announced he was retiring at the end of June.