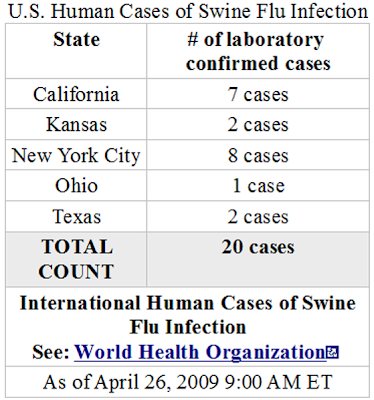 The Chicago Tribune reported just after noon that a “Public Health Emergency” has been declared by the Department of Homeland Security.

From pictures published, Mexico seems to be in full panic. 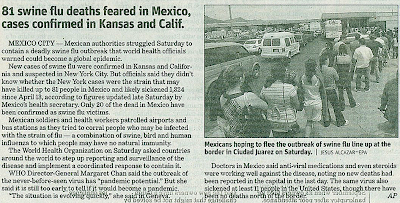 Still, there is no quarantining of those coming across the Mexican border. 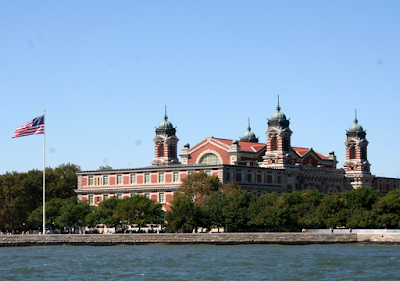 The United States was smart enough to do that at Ellis Island. People like my wife’s grandfather, who immigrated from Italy, was not granted immediate entrance into the United States.

Here’s what the CDC says about swine flu.

Still more CDC information and links can be found here.

“12 million doses of the drug Tamiflu are being released from a federal stockpile so that states can get it if needed,” the AP story the Tribune picked up says.

Guess a lot of us are going to be left out.

So, what’s to be done with flu carriers?

“There is no vaccine available at this time, so it is important for people living in these areas to take steps to prevent spreading the virus to others,” the CDC writes. “If people are ill, they should attempt to stay at home and limit contact with others.”

I’ve been told that the Department of Homeland Security has created “containment centers” though out the country.

So, I Goggled “containment center” and came up with this February 2006, University of Missouri-Kansas City School of Medicine newsletter.

“If the avian flu made the jump to being spread human-to-human, even the best-case pandemic scenario could mean chaos in the United States, she said. Garrett, for instance, said she could envision hospitals and clinics being overrun; vaccines being woefully limited and ineffective. She said death could primarily strike people 35 and younger; all transportation could come to a halt; and sick people could be subject to military confinement,” the article continued.

“Can you imagine road blocks in and out of Kansas City, people being forced out of their cars and having their temperature taken; and if their temperature is up even a little, they’re taken to a containment center,” Garrett told the audience.

Garrett was not talking about swine flu, but the U.S. Government is certainly treating it more seriously than it ever did avian flu.