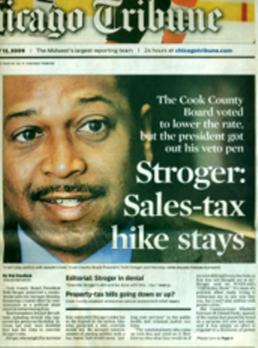 The difference, of course, is that the Northwest Herald cares not one wit that Mayor Aaron Shepley and his city council (minus Jeff Thorsen) raised the Crystal Lake city sales tax 75%.

Maybe if newspapers were taxed as they are in other states, the NW Herald would have cared.

= = = = =
You see the Chicago Tribune’s front page article about Todd Stroger’s veto of the Cook County sales tax repeal on top and it editorial below.

At the bottom of the editorial, you can see that it has been 316 days since Todd Stroger’s sales tax hike went into effect.