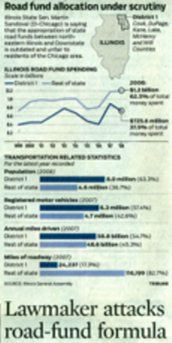 That’s the headline of Tribune reporter Jon Hilkevitch’s article about Chicago State Senator Martin Sandoval’s press conference taking on the disproportionately low proportion share of Motor Fuel Taxes that the Chicago metropolitan area has been getting since 1999.

As I mentioned yesterday, after the 1989 gas tax hike sponsored by Lake County’s Bob Churchill, our area’s share increased from 40% to 45%.

Then came Governor George Ryan’s 1999 Illinois FIRST, which pushed the Chicago area’s share back down.

Last year the Chicago area only got 37.5% of the road money.

Compare that to the 54.7% of the miles driven up here in the six county Chicagoland area.

Sandoval held a press conference yesterday at the Statehouse.

Today, this headline appeared in the Bloomington Pantograph:

Guess he hasn’t heard of the new toll bridge across the Fox River planned south of Algonquin.

That new Mississippi River bridge in Haine’s area won’t be a toll bridge, though.

No wonder he can be so cavalier. (See first definition for its use as a adjective.)

Here’s the start of McDermott’s article:

“A group of Chicago-area state senators just conducted a news conference to complain that their region is getting short-changed in state road funding, and to demand that Chicagoland get a greater share of the state’s budget pie.

“(If you’re a southern Illinois reader, we’ll pause here to let you stop laughing and compose yourself.)”

I would note that while Downstate parks closed by Governor Rod Blagojevich have been re-opened, the busiest recreational waterway in Illinois, the Fox River and Chain of Lakes in McHenry and Lake Counties has had the lock through its dam threatened with closure Mondays and Tuesdays, as well as fewer hours the rest of the week.

And need I remind Downstaters that their de-populating schools continue to get State Aid to Education for empty classrooms (as a result of the delayed recognition of student growth in the suburbs), while newly full classrooms in Chicago’s suburbs get no state aid that first year.

If this sounds like I’m giving Downstate legislators a lot of credit, that’s right. They deserve it for consistently fleecing their Chicago area colleagues.

Only the Chicago Tribune thought this topic was worth a story.