You need a quorum for a board meeting.

Right now the Huntley school board has only one board member as a carryover for its Finance Committee.

That would be Kevin Gentry.

Hard to have a quorum with one committee member.

Finance Committee members Tony Quagliano and Larry Snow are no longer on the board.

Replacement members to the Finance Committee have not yet been appointed and approved by the Board. Board approval is required by the board’s policy. Such a vote of approval can only occur at a scheduled board meeting and that hasn’t happened yet.

Board member Aileen Seedorf alerted the board to a similar situation at the last Committee of the Whole meeting.

For those at home hoping to follow your school district’s finances, well, you can’t. At least not for now. Neither the Building nor Finance Committee board packets are posted online.

Shawn Green was elected Board President again, but he missed his first Committee of the Whole meeting.

Last night a contract negotiation meeting was held between Huntley’s teachers union and the negotiating committee for the Board. Absent was the administration. Apparently the Superintendent, Controller and Human Resources Director all had other more important things to do.

Board President Shawn Green was very vocal that the union should discuss their proposals in public.

Illinois should follow Florida’s example and conduct all union negotiations in public.

Apparently the union wants to bring its proposal for early retirement benefits to the board in secret session.

Is the answer a bit obvious? 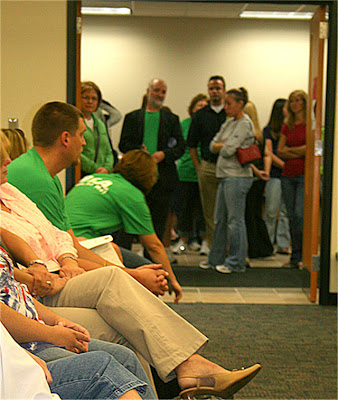 The agreement between the Board and union says that on consensus the proposal will be brought to the board.

Has there been a consensus?

The agreement also calls for consideration of an alternate salary schedule plan. (For information about past salary hikes, go here.)

With what they won after their strike, why would the Huntley Education Association want to change anything in the salary schedule?

The teachers obviously want their retirement benefits sweetened, but they don’t seem to want to talk about the current really sweet deal they have on automatic salary increases.

The union is refusing to talk about changing salary schedule.

The current longevity step increase is 3 1/2%–quite high when compared to other schools. That means starting salaries for teachers might have to be lower than surrounding districts to compensate for the later huge automatic step increases.

Of course, starting salaries are easier for reporters to understand than step increases.

And how much sense does it make to pay extra money for double masters’ degrees?

That’s in the salary schedule.

Unless increased performance can be linked to a second master’s degree, does it make sense to pay extra for it?

= = = = =
The photo of the teachers in HEA shirts was taken the night they confronted the board.