WHEREAS, The members of the Illinois House of Representatives are pleased to honor Bill Dwyer of Crystal Lake for his many contributions to his community; and

WHEREAS, In addition, from 1990 to 2000 he served as a County Board Member; from 1991 to today he has served as the Chairman of the Crystal Lake Civic Center Authority; in 1993 he was honored to be named the Parade Grand Marshal; and from 1993 to 2007 he served as President of the Raue Center; and 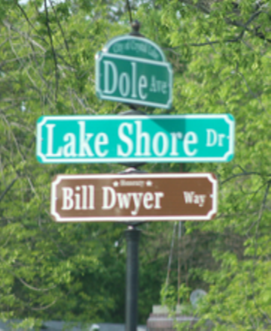 RESOLVED, BY THE HOUSE OF REPRESENTATIVES OF THE NINETY-SIXTH GENERAL ASSEMBLY OF THE STATE OF ILLINOIS, that we honor Bill Dwyer for his hard work and dedication to the people of Crystal Lake; and be it further

RESOLVED, That a suitable copy of this resolution be presented to Bill Dwyer as a symbol of our respect.

And, as you can see, Crystal Lake has followed in Chicago’s footsteps by giving an honorary name to a street:

It’s located near the Main Beach’s Band Stand across from the entrance to the parking lot.