I’m pretty amazed that the issue I stressed when I ran for governor against Rod Blagojevich and Jim Ryan in 2002 is getting attention during this year when the media is pushing reform:

When my Libertarian Party running mate Jim Tobin and I kicked off our campaign in his National Taxpayers United of Illinois office in the South Loop, the sign we held up is the one you see below. 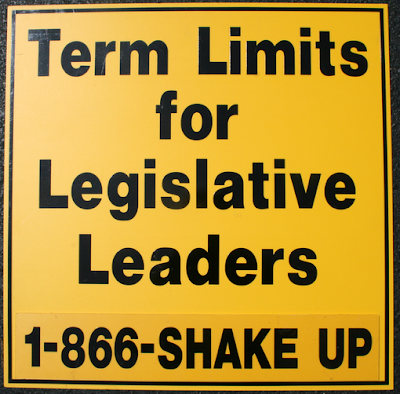 The sign went everywhere in the campaign and might have gotten some real play had Blagojevich and Ryan not conspired to skip the Illinois League of Women Voters gubernatorial debate after I managed to reach the 5% threshold in the Daily Southtown’s 1,000 person survey. (That was the largest in the entire campaign, by the way.)

It seemed perfectly obvious to me that legislative leaders should not be leaders for life.

Except for two years after Republican Lee Daniels managed to elect a Republican majority in 1994—the year that the GOP’s Contract with America clicked on the national level—Mike Madigan has been speaker since George Ryan held the office in the early 1980’s.

Pate Philip stopped all sorts of bad legislation in his leadership of the state senate during the 1990’s, but it still seems to me that there ought to be turnover.

While the old guy/gal may pick the new guy/gal, at least the newbies would have different friends.

When Daniels got deposed during a staff-campaign-work-on-state-time scandal initiated by Rich Means–part of which took place in McHenry County–successor Tom Cross won votes by promising not to try to follow Daniels’ example of being Republican leader as long as he could.

And, of course, nothing will happen on the issue because Madigan is not willing to see an end to his regime…even if it were ten years from now.

The Daily Herald has polled suburban legislators on how they stand on various reform proposals and how the term limits for leaders issue shakes out can be seen below. 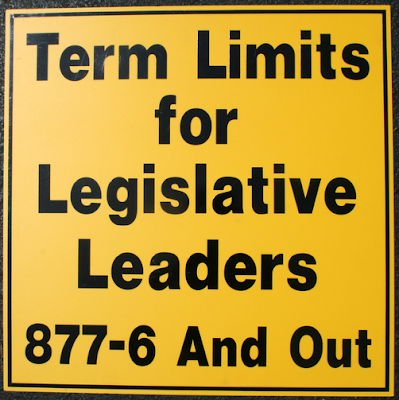 = = = = =
The top sign is the one used in the 2002 campaign. The bottom one was the first version. I concluded that 8 years as leader was better than 6, hence the change in toll free phone numbers.