That’s supposed to make it all better.

While Jim Kelly, the attorney for Grafton Township Trustees, used more lawyerly like language, that was his message to McHenry County Circuit Court Judge Michael Caldwell.

He told the judge that the trustees had been trying to comply with the judge’s instructions to start over with the issues in question. The way the trustees interpreted what Caldwell ordered was that

if they gave proper notice at a township board meeting, they could go ahead with the financing, letting contracts and building of the new town hall.

Kelly said his clients were trying to follow the judge’s instructions in placing three items on last Thursday’s meeting to get the new $5 million (cost including interest) township hall off the ground. 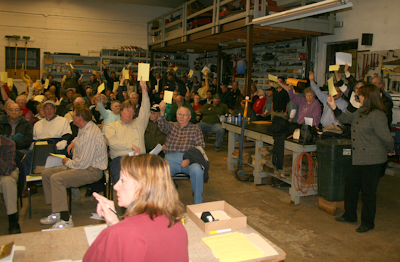 “You said to start over at base one. That’s what they did,” Kelly explained.

“That’s (a misunderstanding). If it isn’t authorized at the April township meeting (it isn’t proper),” Caldwell explained.

So, the judge was referring to the necessity of the electors to approve the construction of a new building at the annual town meeting, while the trustees were trying to cure what the judge concluded was the lack of adequate notice at the meeting of the township board when it approved borrowing money.

“That was not my intention,” Caldwell said. “The annual township meeting was ‘base one.’

“I’m not going to remove the injunction.

“The individual members of the township board are enjoined from

The trustees have appealed the original injunction. Kelly said he would include the one about the agenda in the same appeal.

Bishop questioned whether Kelly could represent the board, since he had not been appointed by newly-sworn in Grafton Township Supervisor Linda Moore. Kelly replied that it was not proper to consider that question at this hearing.

The township trustees rejected Moore’s nomination of Richard Flood to be township attorney to replace Kelly, whom Moore had dismissed when she took office last week.

There was also questions about whether the township as a corporate entity or the trustees should be the defendant. The injunction, the judge pointed out, was against the trustees as individuals.

Plaintiff attorney Jim Bishop wanted to put the question of whether the township is allowed by law to borrow money for more than ten years without a referendum. The debt certificates issued with inadequate public notice were repayable over a 20 year period.

“A township may construct a township hall under contracts providing for payment over a period of time of not more than 10 years.”

But the hearing Thursday morning didn’t go in that direction.

Attending the hearing were plaintiff taxpayers Dan Ziller, Sr., Rick and Tammy Lueth, Frank Kearns and Linda Moore. None of the trustees showed up.

More than 100 residents have filed a petition asking for a referendum in the fall 2010 general election, but Township Clerk Dina Frigo has not yet filed it with the county clerk.