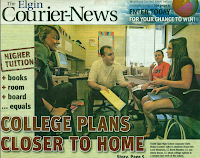 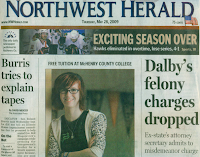 Thursday the Elgin Courier-News and McHenry County’s Northwest Herald both featured junior colleges as a low cost way to go after high school.

But what a difference three generous millionaires made in McHenry County—at least for the McHenry County College district part. (District 300 is in the Elgin Community College District and ineligible for MCC’s free tuition offer.)

The headline above the fold on the NW Herald was

It’s a story about the McHenry County College Promise.

In the Kane County paper, there was a photo of South Elgin High School Counselor Chris Boden talking to three 17-year olds. 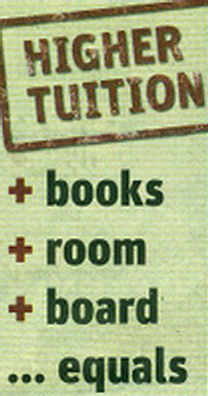 Along the left was

then in large block letters,

The NW Herald article indicates that the donated money might run out sooner than the five years for which it was thought to last.

Before I learned that the college board had decided to waste upwards $300,000 on Ex-President Walt Packard’s little-work going-away present, I sent in a contribution.

I had second thoughts after I read of that monumental exercise of poor judgment (I’m willing to be convinced otherwise), but have concluded that really bad management should not be used as an excuse to discourage others to contribute to this earmarked fund.

It’s not as if the college board can spend it on a baseball stadium.