It is a shame that sabotage by some overzealous political opponents created the result reached in court today and continues to fuel untrue and overreaching statements in the public.

The crime pled to today was the theft of approximately 5,100 sensitive law enforcement documents from the State’s Attorney’s Office – documents taken for political purposes, according to the special prosecutor.

Those who hatched the plot or aligned with them are trying to characterize this as something else. The facts undermine that allegation.

The computer information was peddled to the news media in the middle of a contested election instead of to law enforcement, where such matters should have been referred if a true “whistle blowing” issue existed.

When we first learned that an office computer may have been compromised, and thus a crime committed, we immediately acted, with an understanding that the content of the computer may become public.

We first confirmed, through a computer forensics expert, that indeed content had been removed from an office computer, without authority. Our office computers contain extremely sensitive material, including information on confidential informants, undisclosed investigative material and privileged communications between attorney and client.

The State’s Attorney’s Office then petitioned the court to appoint a special prosecutor, David O’Connor, to investigate this matter and to take action as he deemed appropriate.

My acquaintance with Mr. O’Connor is by reputation alone. He is known throughout Illinois as a thorough, vigilant, and fair prosecutor and has served as a special prosecutor in other cases.

We have never met or spoken to each other and his communications with this office were limited to discussions about the logistics of grand jury and court proceedings in this county.

Today, Ms. Dalby has been sentenced by the Court pursuant to her plea of guilty.

I would note that we always had a good relationship with Ms. Dalby and indeed she made numerous social visits to our office, volunteered to work in the future, and exchanged pleasant and supportive letters all after her departure as an employee.

She said she left with a positive impression of the State’s Attorney’s Office and we had the same opinion of her work. I wish her well in the future.

As to the allegations made by Ms. Dalby’s attorney and others, they are false.

As I have previously stated, my re-election campaign was run outside of the State’s Attorney’s Office.

All of my campaign meetings were held at a conference room at Panera Bread Restaurant or at a private home of a campaign volunteer not employed by this office.

Further, all campaign literature was designed, printed and mailed by a private mail order house. 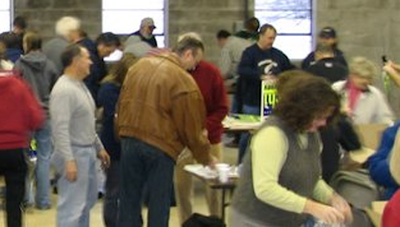 More than 100 campaign volunteers, not employed by this office, assembled election signs and organized campaign literature and materials at a local warehouse.

Those same volunteers distributed campaign materials door to door throughout the county. Some of our employees, on their own time, freely volunteered for the campaign.

Others in the office chose not to participate. There was never any pressure to get involved in my campaign.

Even though the distinction gets blurry at times, I was careful not to cross the line between government and politics.

My statement today probably will not stop the politically charged statements by those who opposed my election and re-election.

The public needs to understand that these same people have made many false charges in the past and will no doubt level equally false diatribes in the future.

My focus is and will always be to keep the people of McHenry County safe and secure and to administer justice fairly.

There is an earlier statement Bianchi issued in March.

= = = = =
In the upper and lower right, you see photos of McHenry County State’s Attorney Lou Bianchi.

In the middle is a sign party to which he refers.

To the left of Bianchi’s head shot are photos of his GOP primary opponent, Dan Regna, and Tom Cynor, the man that McHenry County Democrats slated to run against Bianchi when Regna lost.