Not that you could notice from the infrastructure bill that was passed.

Let’s eavesdrop on two McHenry County legislators discussing what to put in it.

Legislator A: “Let’s give at least $75,000 to every township road commission in McHenry County. They’re powerful people.”

Legislator B: “But, some of them don’t need state money.”

Legislator A: “Hey, no problem. We’ve got plenty.”

Legislator B: “Yeah. It’s coming from those slots we’re going to put in the convenience stores and bars.”

Legislator A: “What should we do about the big townships?”

Legislator B: “We’ll just give them more.”

Legislator A: “Whether they need it or not?”

Legislator B: “Did you really ask that question?”

Here’s the $1.895 million that McHenry County’s 17 township road commissioners are slated to get from the new capital bill: 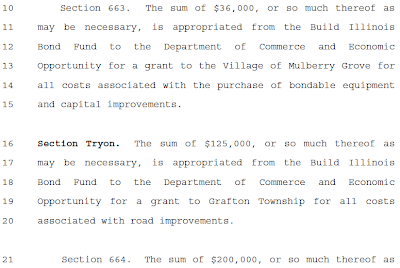 And, if there were any doubt where $125,000 of Grafton Township’s money came from, click on the part of the bill I have posted. It has a

I’ve never seen that type of a section before, but staffers probably put a legislator’s name on each section before the numbers were inserted.