I’m not even going to read the Northwest Herald article before posting this. 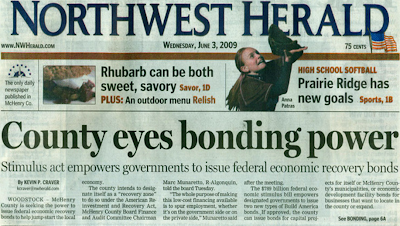 It’s front page headline tells much too much:

This is so wrong on so many levels.

First, the borrowing authorized and unauthorized by Congress (remember the Federal Reserve) is going to cause rampant inflation unless I miss my bet. That’s the usual result of running the printing presses at the U.S. Mint.

Now, the McHenry County Board is thinking about borrowing money with the expectation that the big sugar daddy in Washington will continue sending sugar plums to his children in all 3,000 counties.

And the McHenry County Board is going to play sugar daddy to business and local governments.

Sounds like a lot of opportunities for campaign fund solicitation there.

Perhaps a look at this 2006 article about example of the business judgment of the McHenry County Board might be instructive:

McHenry County Board Backs and Fills
…After the Primary Election

The State’s Attorney’s Office advised the county board to write off $177, 470 of the $200,000 loaned to Contempos Industries after the election.

Significantly, the recommendation came after the fall election. Democratic Party county board candidates didn’t figure out this fiasco in time to attack Republicans’ bad judgment

It was recycled State of Illinois dollars. We know we didn’t pay any of that.

And, who could forget the multimillion loan to the Northwest Herald at sub-market rates?

I filed a Freedom of Information request for the details a couple of years and got nothing. Guess it’s time to try again.

In any event, the NW Herald was not an “in extremis” condition then. The excuse for loaning the money was to keep the county newspaper from moving out of the county.

The real reason was to put the paper in the back pocket of the Republican Party. (Anyone want to deny the strategy worked?)